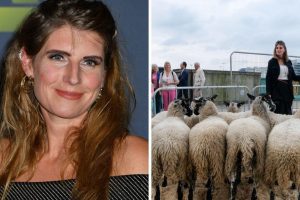 The Yorkshire Shepherdess, 48, who has nine children aged six to 21, revealed that her youngsters help out on the farm, with the kids donning wellies and boiler suits over their school uniforms. The family all work together at Ravenseat, despite Amanda’s recent split from her husband Clive Owen.

The TV star and author admits that the regimented routine doesn’t always go to plan, and sometimes her brood get to school covered in cow snot and smelling of silage.

However, fortunately for the mum-of-nine, her kids don’t care when they are messy, as they understand that it goes with the territory.

Speaking to The Times, Amanda explained fans assume that life will be a lot tougher now that she has split with her husband Clive, who she works alongside on the farm.

But the author feels that life is now a lot easier with the couple living apart from each other.

Amanda split from Clive, who is 21 years her senior, last summer and revealed that he has a neighbouring farm just a stone’s throw away.

She said: “We have two farms that are basically next door to each other. It’s close enough for it to be useful, but far enough for us to have space.

“Whatever our personal situation, there’s a farm to run and nine children to look after so we’re working together to make it happen.”

Amanda then went on to describe a typical day as a shepherdess and a mother of nine.

With her oldest child away at University and two of them working, Amanda starts her day getting the younger ones ready with military precision.

She said: “So phase one is getting my 14-year-old and 12-year-old ready for the school bus.

“That means an hour of shuffling around sullenly and eating breakfast without speaking. “

“l get a pot of porridge going on the range and people will help themselves.

“Phase two is sorting the younger lot — there’s always someone who has forgotten their swimming costume or trumpet.”

Alison Hammond documentary branded ‘out of touch’ by One Show viewers

Amanda then described a typical working day after packing the kids off to school.

She said: “I might spend the morning attending an auction, visiting the agricultural supplier, gathering sheep, or just shoveling s**t, then lunch is generally helping yourself time.”

She continued: “I’d love to have a power nap in the afternoon before the kids get back, but I can’t.

“I just drink industrial quantities of tea to keep going. I’ll try to have a lovely evening meal like a tagine on the table by 6 pm.

“I would hope there’ll be a brief moment when everybody shows up at the same time.”

“If I’ve got everything done by 9.30 pm, I like to spend some time on my running machine.”

“The exercise helps clear my head if I’ve not done enough manual labour during the day.”

She continued: “Time is short so if I do have a drink in the evening — which is incredibly infrequent — I’ll choose something potent, like 89 percent proof absinthe.”

Amanda also admitted that bedtimes for the kids are unregimented and that she throws that responsibility back to the children.

She thinks the hands-off attitude is paying dividends.

She said of her children: “They’re all incredibly independent but if something brilliant is happening like a cow is calving or it’s a really starry night, we’ll go out and experience it together because that’s what memories are made of.”