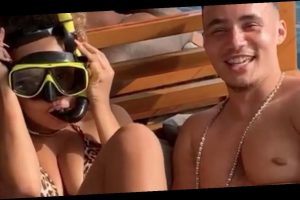 A short Instagram clip revealed the topless hunk resting his hand tenderly on Amber’s leg as the couple joined pals on a luxury boat.

The short video was filmed by birthday girl Kaz, who asked Amber and her mystery boy: “Are you on a snorkelling ting?”

Amber, 22, was having so much fun on the sunny getaway that she later admitted on Instagram: “Missed my flight for the celebrations.”

The former Love Island girls, Amber, Kaz, Harley Brash, Anna Vakili and Francesca Allen, have been living their best lives recently as they sunned themselves in Phuket, Thailand.

The girls had jetted out on the luxury party holiday courtesy of a collaboration with fashion retailer MissPap and influencer brand We Are Komodo.

Documenting their lavish trip all over social media, 2019 winner Amber ensured to share a sneak peak of their wild partying antics as she posted numerous Instagram stories with her 2.8 million followers.

For Kaz’s party packed birthday, the girls were joined by Kaz’s boyfriend Theo Campbell and other guests as they spent the day sunning themselves on a catamaran before hitting the clubs.

Amber, who was dumped last year by Greg O’Shea, has recently suggested that she’s happy with her single status. Although rumours had circled that she was involved with fellow contestant Ovie Soko, she told the MailOnline that she’s having a good time without a boyfriend.

"'My love life is nonexistent I'm not really bothered, I'm in Thailand I don't really need a boyfriend, I'm 22 having a good time,” she told the publication.

“I'm just OK with where I'm at, I'm having the best time ever, the opportunities that have come my way are wild. Unless they're going to enhance my life I'm not really looking.”

Contrary to her recent statement, things look to be hotting up in Thailand as the group’s boozing continued throughout Monday.

Although the girls have been busy with birthday celebrations in Phuket, they also appear to be keeping up with the Winter Love Island that is currently taking place in South Africa.

Amber has already thrown her support behind loved-up contestants Leanne and Mike, whilst also expressing concern over Sophie and her former partner Connor.

She recently explained that Sophie should “be careful” over his “intense” behaviour.

END_OF_DOCUMENT_TOKEN_TO_BE_REPLACED

END_OF_DOCUMENT_TOKEN_TO_BE_REPLACED
We and our partners use cookies on this site to improve our service, perform analytics, personalize advertising, measure advertising performance, and remember website preferences.Ok