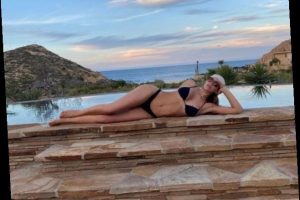 It’s not hard to imagine what Scott Disick sees in Amelia Hamlin.

After all, he’s a 37-year-old semi-washed-up reality star with three kids, and she’s a 19-year-old model from a wealthy and influential family.

But what does Amelia see in Scott?

We’re sure she’s not dating him just for the clout — after all, she could probably land a more relevant dude if she put some effort into it.

Maybe she could even land herself an NBA player — the gold standard in famous boyfriends in Amelia’s Calabasas-based social circle.

But while Scott Disick might not be as famous as James Harden or Jimmy Butler, he’s the reason that Amelia’s name has been appearing in so many tavloid headlines.

Think about it — would the gossip community be so interested if Amelia got involved with an appropriately-aged pro athlete?

Anyway, Amelia is no fool.

Maybe she’s dating Scott to boost her public image, or maybe she’s genuinely head-over-heels for the guy, and the free publicity is just a happy side effect.

Either way, she’s taking full advantage by posting the thirstiest content of her career — such as it is.

Amelia has been racking up the followers — she’s creeping up on the all-important 1 million mark — and the likes in the months since her relationship with Scott first went public.

And in response, she’s been giving her adoring public more of what they want — pics of her in nearly non-existent bikinis!

“i rly love laying on hard stone so comfy,” Hamlin captioned the photo above.

Her sarcastic remark suggests she wasn’t just lounging poolside, and it leads us to belive that the pic was part of a modeling shoot.

So is Amelia getting more work now that she’s involved with Scott?

Tough to say, but the fact that she’s now just one step removed from the Kardashians — one of the most influential families in the worlds of fashion and social media — probably doesn’t hurt.

Amelia insists it’s not creepy that she’s dating Disick, but there are others who seem to disagree

“people can embrace themselves however they feel fit for them at that moment in time. people grow. people learn to love themselves more and more.”

It was initally assumed that she was lashing out at anonymous online haters, but it’s possible that Amelia was responding to criticism from her parents, who are apparently not thrilled with her new relationship.

“Lisa isn’t going to acknowledge this publicly for now because she’s still trying to wrap her head around it and thinks this is a phase,” an insider recently told the Daily Mail.

“But when she does speak about it she’ll keep her cool but really, she’s worried,” the source continued.

“That’s her youngest kid. She really does like Scott but both her and Harry don’t want someone that age with so much baggage to be with their baby girl, especially given Amelia’s own mental health issues.”

Sounds like the situation could wind up getting very messy — but hey, at least Amelia will rack up a ton of followers in the meantime.