Home » Celebrities » Andy Cohen on Jen Shah’s Arrest for Alleged Fraud: ‘I’m Waiting to See How It Plays Out’

Andy Cohen on Jen Shah’s Arrest for Alleged Fraud: ‘I’m Waiting to See How It Plays Out’ 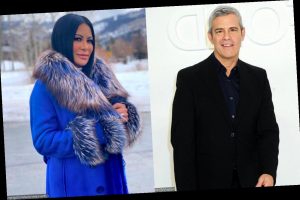 The Bravo host says he has no additional information to share on ‘The Real Housewives of Salt Lake City’ star’s case, but hopes that that none of it is true.

AceShowbiz –Andy Cohen will be on the lookout over Jen Shah‘s legal drama. Just days after “The Real Housewives of Salt Lake City” star got arrested for alleged wire fraud and a massive telemarketing scheme, the executive producer for the hit reality television series shared his thought on the controversy.

When hosting his SiriusXM show Radio Andy on Monday, April 5, the 52-year-old talk show host/producer was asked by a caller to address the allegations against Shah. “Oy vey,” he first exclaimed. As he clearly hesitated to make any comment, he pointed out, “I’m waiting to see how it plays out.”

Andy later added that he hoped Shah was innocent, especially since the reality star has pleaded not guilty in the wake of her arrest. “I have nothing to add to what we already know, other than I certainly hope and pray that none of it is true,” the father of one continued.

Shah was busted in the parking lot of a small strip mall in Salt Lake City on Tuesday, March 30 for allegedly defrauding elderly people via a telemarketing scheme. New York prosecutors reportedly stated that the telemarketing scheme went on for nine years. The 47-year-old star was taken into custody by Homeland Security Investigations NY agents.

The television personality was reportedly released on an unsecured bond, which means that she must attend the next court date instead of paying bail upfront. According to The Sun, some of her release conditions included the banning from traveling, the using of credit cards and the “maintaining or actively seeking verifiable employment approved by the pretrial officer.”