Home » Celebrities » Angela Deem and Michael Ilesanmi: President Biden Will Let Us Be Together!

Angela Deem and Michael Ilesanmi: President Biden Will Let Us Be Together! 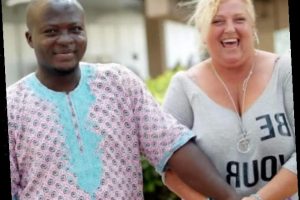 90 Day Fiance fans have openly wondered if Angela Deem and Michael Ilesanmi can ever be together despite getting married.

President Elect Joe Biden could change everything for them … and Angela, of all people, has to have mixed feelings about that.

Before we delve into what has changed, let’s lay out exactly what is keeping Angela and Michael from being together.

The two had a long-distance relationship before they met in person for the first time on Season 2 of 90 Day Fiance: Before The 90 Days.

Angela is a 55-year-old grandmother from the state of Georgia. Michael is 32 years old and from Nigeria.

Angela and Michael applied for a K-1 visa.

This is the 90-day visa that defines the premise of 90 Day Fiance — an American can sponsor their spouse-to-be, who has 90 days to marry them or leave.

However, their application was denied.

Part of the reason for the K-1 visa being turned down may have been due to income, and Angela’s two DUIs may not have helped.

A bigger issue may have been that an older American woman marrying a much younger Nigerian man may have been flagged as a likely fraud.

While viewers may reason that no scammer would put up with all of the nonsense that Michael has endured with Angela, on paper, she looks like a ripe target for a con artist.

Angela and Michael weren’t ready to give up on their relationship, so she knew what she had to do.

The spousal visa is given more weight in the application process, as it requires that the couple already be legally married.

So Angela and Michael resolved to have a Nigerian wedding — albeit in a very American style — and apply for a CR1 visa.

“It’s definitely bittersweet that my family is missing this huge event in my life,” Angela confessed to the camera on 90 Day Fiance.

“I hope I can keep my promise to them and bring Michael over to the states,” she stated, “but the reality is, he might never make it to the states.”

Angela explained: “We still have to go through a spousal visa, and it can be denied. This could be all for nothing.”

The CR1 visa is for an American to bring over a spouse to whom they have been married for less than two years.

It was hoped that they would have a relatively speedy visa process — that they might only need to wait 5-8 months and that it would be approved.

On January 31, it was announced that the Trump Administration was expanding its “travel ban,” a ban on several Muslim-majority countries.

The latest round of white nationalist anti-immigration policies included Nigeria on its hit list.

Just days after Angela married Michael, Michael’s chances of getting approved for a spousal visa were reduced to next to nothing.

The reason for this — and for the ban itself — is largely due to Stephen Miller’s goal to end family immigration altogether.

Right now, close relatives of Americans, including spouses and children, can immigrate to the US through the visa process.

Under Trump, Miller and other white nationalists have been working to end the practice because it gets in the way of their dream of a white ethnostate.

Of course, not all 90 Day Fiance fans felt particularly sorry for Angela, who had made a big show of her love for Donald Trump.

“Angela Deem is a big supporter of Trump,” a fan on Reddit noted, “who thinks Nigeria is a ‘s–thole country’ and has drastically reduced all types of immigration.”

The Reddit post continued, pointing out: “She is now facing the consequences of having helped to elect Trump.”

Another major obstacle for the two of them is the COVID-19 pandemic, which the Trump administration used to put a hold on all immigration processes.

This has been devastating for asylum seekers, but it also means that Angela and Michael’s visa application is in a state of limbo.

The two have not given up on being together. Is there any hope left for them?

Last week, the American people elected Joe Biden to become the next President of the United States.

One of President Elect Biden’s pledges has been to make restoring American immigration a priority, both for our economy and for our role in the world.

His campaign reports that he plans to immediately reverse many Trump policies on Day One of his administration when he takes office in January.

The Biden Administration will also take steps to actually grapple with COVID-19 instead of leaving the states and individuals to fend for themselves.

It is unclear how much can get done — and much of what the Biden Administration can and cannot do may hinge upon the outcome of Georgia’s runoff Senate races and, thus, control of the Senate.

Curbing the infection rate will go a long way towards resuming standard immigration and visa processing. And so will expelling monsters like Stephen Miller from government.

This could mean that, for avowed Trump fan Angela Deem, her only hope of being united with her husband is the Biden administration.

We of course do not expect for her to recognize this or to express regret, as that does not seem to be in her nature.

But a lot of 90 Day Fiance fans will be watching … even if many believe that Michael would be better off divorcing her and marrying someone who is not verbally abusive.

END_OF_DOCUMENT_TOKEN_TO_BE_REPLACED

END_OF_DOCUMENT_TOKEN_TO_BE_REPLACED
We and our partners use cookies on this site to improve our service, perform analytics, personalize advertising, measure advertising performance, and remember website preferences.Ok