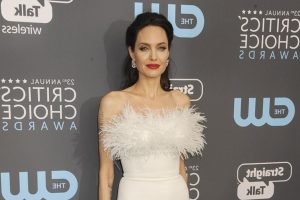 The actress/humanitarian praises the ‘strength, resilience, and resourcefulness’ of Afghan women while calling out the mistreatment they suffered in their own country.

AceShowbiz –Angelina Jolie is in awe of the “strength” and “resilience” of Afghan women. Speaking out one year after US troops withdrew from Afghanistan and the Taliban took over the country, the 47-year-old actress and humanitarian hailed women for their fight amid horror and adversity.

“The daughters of Afghanistan are extraordinary for their strength, resilience, and resourcefulness,” she said, writing for TIME magazine.

The “Eternals” star referenced their treatment in the country, including public beatings, kidnapping, political imprisonment and forced marriages. She added, “Yet despite the dangers, the greatest resistance to the reversal of women’s rights in Afghanistan has not come from foreign powers, but from Afghan women themselves, who have taken to the streets.”

Angelina condemned the way the advancement of Afghan women over the past two decades has been “overturned with unimaginable speed.” She wrote, “Overnight, they and 14 million other Afghan women and girls lost their right to go to high school or university, their right to work, and their freedom of movement.”

And she also hit out at the United States and its allies for making the decision to pull out, labelling it “the worst possible step” while offering a message of hope that the current situation isn’t “the final chapter.”

She continued, “There have been different chapters in Afghanistan’s history and many dark moments. This is undoubtedly one of them. But I’m sure that this isn’t the final chapter. The dream of a pluralistic, open Afghanistan built on the equal efforts and free voices of all its people may seem to be – and be in reality – a distant hope. But I know it’s possible. This does not end here.”

Meanwhile, the Hollywood star had an emotional moment in her personal life last week when she dropped her 17-year-old daughter Zahara off at Spelman college in Atlanta, Georgia.

In a video posted online, school president Dr. Helene Gayle asked Angelina how she feels about being a Spelman mum and the actress replied, “I’m gonna start crying! I have not started crying yet … I’m holding it together.”