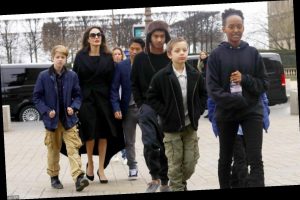 In one of the photos published by British Vogue, the Oscar-winning actress is seen styling her son Maddox’s hair as the 19-year-old gets shirtless and reveals his snake tattoo.

AceShowbiz –Angelina Jolie‘s love for body arts has passed down to one of her children, Maddox. The 19-year-old revealed his huge snake tattoo in a rare intimate look of the actress’ life at home with her children published by British Vogue in its March issue.

One of the stunning black-and-white photos shows the “Girl, Interrupted” Academy Award-winning actress styling her eldest son’s hair as he went shirtless, showing the massive snake tattoo etched down his torso. The Yonsei University student also appears to have more tattoos on his arm.

The mother of six was standing behind Maddox in the bathroom as she was pulling his long locks, seemingly trying to tie it into a ponytail. She held a clip in between her teeth, while Maddox was sitting in a pair of black jeans with a tear on one of his knees.

Another picture captures the family at lunch. “The Eternals” star and three of her children, 14-year-old Shiloh, 16-year-old Zahara and 12-year-old Vivienne, gathered in their backyard for a meal. The outdoor eating area was a picturesque setting, with Vivienne appearing to hand out stuff to others while her mother and her siblings sat down around the table full of assorted delectables.

In an interview with the magazine, Angelina confessed she’s not good at being “a traditional stay-at-home mom.” She shared, “Well, I was never very good at sitting still. Even though I wanted to have many children and be a mom, I always imagined it kind of like Jane Goodall, traveling in the middle of the jungle somewhere. I didn’t imagine it in that true, traditional sense.”

“I feel like I’m lacking in all the skills to be a traditional stay-at-home mom,” the actress went on. “I’m managing through it because the children are quite resilient, and they’re helping me, but I’m not good at it at all.”

Angie also admitted that “the past few years have been pretty hard” following her split from Brad Pitt and amid their long and contentious custody battle, but she’s “been focusing on healing our family.” She added, “It’s slowly coming back, like the ice melting and the blood returning to my body.”

Besides Maddox, Zahara, Shiloh and Vivienne, Angie shares two other children, 17-year-old Pax and 12-year-old Knox, with the “Once Upon a Time in Hollywood” actor.