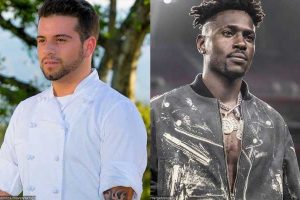 The Tampa Bay Buccaneers wide receiver has resolved his $10,000 debt after his failed efforts to pay back led his former live-in chef Steven Ruiz to reveal details of his alleged fake vaccination card.

AceShowbiz –Antonio Brown apparently has squashed his feud with Steven Ruiz, who accused the NFL star of stiffing him out of $10,000. According to his former live-in chef, the Tampa Bay Buccaneers wide receiver has settled his debt.

Steven, who is also the owner of Taste ThatLA, confirmed to the Tampa Bay Times on Monday, December 20 that he had “satisfactorily resolved” the dispute with Antonio. However, he declined to reveal terms.

Steven’s representative also confirmed to TMZ, “Both parties were satisfied.” His spokesperson added, “After two months of being slandered in the press, Mr. Ruiz felt it was in his best interest to move forward and attend to his clients’ needs for their Christmas parties this week. He wished the best to AB and the Bucs as they head toward the playoffs.”

Steven previously claimed that Antonio owed him $10,000. Then the 33-year-old athlete’s failed efforts to make the payment eventually led Steven to reveal details of the Bucs receiver lying about his vaccination status to the strict NFL protocols.

In the wake of the allegations, the Bucs made a statement, insisting the vaccination card was real and “reviewed.” Antonio’s attorney, Sean Burstyn, also issued a statement. Defending his client and denying the accusations, the lawyer stated, “Antonio Brown appreciates the severity of the pandemic, which is why he got the vaccine and supports everyone for whom it is advisable to get the vaccine. Coronavirus has hit close to home as it took him out of a game.”

On December 2, however, the NFL announced the suspension of three players for violating COVID-19 protocols, including Antonio, Mike Edwards and John Franklin III. “Tampa Bay’s Antonio Brown and Mike Edwards have each been suspended without pay for the next three games,” the announcement read.

Upon learning the news, Antonio’s lawyer insisted that his client is “vaccinated.” Sean stressed, “Mr. Brown is vaccinated and continues to support the vaccine for any person for whom it is appropriate.” He added, “The NFL made its determination and, instead of going through the drawn out and distracting process of challenging the outcome, Mr. Brown wrapped this up promptly.”