Home » Celebrities » Apryl Jones Reveals She’s the One Hitting on Lil Fizz: ‘That Was on Me’

Apryl Jones Reveals She’s the One Hitting on Lil Fizz: ‘That Was on Me’ 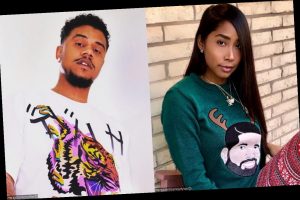 During her Instagram Live, the VH1 personality discusses her whirlwind romance with Lil Fizz, a teammate of her baby daddy Omarion, that landed both her and Fizz in hot water.

AceShowbiz –Apryl Jones is taking responsibility of the drama between her and ex Lil Fizz in the previous season of “Love & Hip Hop: Hollywood“. Apryl and the B2K singer landed in hot water after they went public with their romance despite her history with Fizz’s teammate Omarion, with whom Apryl shares two children together.

During her Instagram Live, Apryl responded to a fan’s question about who she’s “hit” or had sex with. “One of the people that I hit was Dreux,” she said of Fizz, whose real name is Dreux Pierre Frederic. “That was on me. It’ll be… you’ll hear about it. But, that was on me.”

The VH1 personality went on to say, “I mean, it was on him, too, to accept. I’m just saying, it’s not just like, a man coming up to me and being like, ‘Yeah, I want this.’ Sometimes women take [the] lead.” Noting the importance for women to take the lead, Apryl explained, “Sometimes women are like, ‘Yo, I want that. You gon’ give it to me or nah?’ That’s what I mean. It’s not just a matter of a man pressing up on you and liking you. If I want something, I’m gon’ get it, period.”

Fizzo and Apryl started dating in 2019 and put their relationship on display on “Love & Hip Hop: Hollywood”. They even talked about wedding as Fizz said in an episode, “Probably in two or five years I will definitely have another kid.”

Their romance came as a surprise and many criticized them for being together. Despite the backlash, Apryl defended her relationship with Fizzo. She insisted that they were not the only ones messing around with B2K “family,” saying, “There was other relationships that were happening with members with other family members.”

However, their relationship fizzled out as soon as season 6 of “LHH: Hollywood” ended in December. Later in January, they sparked breakup rumors after they unfollowed each other on Instagram. Additionally, it seemed like the former couple blocked each other as their past likes and comments were no longer on each other’s pages.