Home » Celebrities » Are Addison Rae & Bryce Hall Back Together? This Update Is Major

Are Addison Rae & Bryce Hall Back Together? This Update Is Major 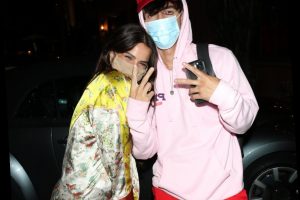 TikTok fans, remain calm. But there’s a chance Addison Rae and Bryce Hall may be back together. I mean, you might have already guessed that based on the multiple social media posts of them dressed as Harley Quinn and the Joker on Halloween, but now The Hollywood Fix legit has video footage of them kissing in their costumes on Halloween night.

In the eight-minute-long video, which The Hollywood Fix posted on Nov. 1, Hall and Rae can be seen sitting with a group of friend at Los Angeles TikTok star hot spot Saddle Ranch. The two seemed to be having a good time chatting with their friends and with each other for about five minutes of the video, but things started to get juicy when they left.

Upon leaving, about seven minutes into the video, The Hollywood Fix managed to snag footage of them kissing as they stood in the back alley behind Saddle Ranch.

From what I could tell watching the video, which was aptly titled "Bryce Hall & Addison Rae Make Out In The Back Alley Behind Saddle Ranch On Halloween Night 10.31.20," it was Hall who went in for the kiss. Also, I know they called it a makeout in the title but it really looked more like a quick peck to me. But hey! Who knows?

As I said earlier, the kiss comes about seven minutes into the video and I’d highly recommend you checking it out for yourself here:

For her part, Rae posted three pictures from the special night. One of her photos seemed to be taken from the same photo shoot Hall posted his pictures from, but the rest are bathroom mirror selfies of them looking extremely intimate with each other.

Now, needless to say, the fact that they kissed doesn’t necessarily mean they’re back together. People kiss their exes without getting back together with them all the time. Posting couple-y pictures with them and dressing in matching Halloween costumes with them in addition to the kiss? Well, that’s a lot. But who knows?!

To be fair, both Rae and Hall have sort of left the door open for a potential reunion. "We were talking and kind of like, on and off, just trying to figure things out," she told Entertainment Tonight back in February. "I’m also, like, very new to this and he’s been in this industry for a really long time. Things happen and then we just decided we’re better off as friends for now because we both have totally different lifestyles right now. Not necessarily just apart from social media, just kind of like, we’re both looking to branch off into different things."

She continued, "right now, we’re just better off as friends. We mutually decided that… We support each other 100 percent." So, maybe now the timing is finally right for them to try being more than friends?