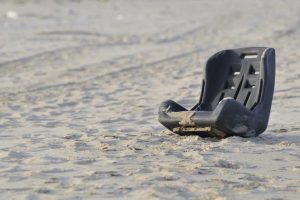 “So have you ever seen this type of car seat just out of nowhere?” the woman in the TikTok video asks. She’s pointing to a photo of an abandoned baby car seat in a parking lot, posted on a Facebook page. “Let’s talk about that right now,” she says. “Because that’s not an ordinary car seat. …That’s actually a trap.” The woman goes on to say it’s a “sex trafficking car seat,” that is being placed as bait by sex traffickers to kidnap and enslave unsuspecting victims.

“If you see a random car seat, please call somebody and please call the hotline and let them know,” the woman concludes, flashing the number for a sex trafficking hotline. “No parent will ever leave a random car seat out there just to be out there. They want you to go up to the car seat and look around while they snatch you really quick.” In a follow-up video, she claimed to have seen the same car seat on the side of the road in her own town, although the car seat in her second video does not look like the car seat in the picture shown in the first.

The woman who posted the video is @princessbellesunflower, a.k.a. Paige Marie Parker, a TikTok creator with 122,000 followers who bills herself as a “spiritual gardener” who offers Tarot intuitive readings on social media. Despite her lack of credentials as a sex trafficking expert, however, her video has gone massively viral, racking up 12.2 million views in just over a day since it was posted.

Parker did not immediately respond to a request for comment from Rolling Stone, but based on a screengrab included in her video, her information appears to be based on a post made by the Wilkesboro Police Department’s Facebook page, which includes a photo of the abandoned car seat in Parker’s first video. But if you read the post from the Wilkesboro Police Department, it does not actually say that the car seat in the photo was used as a lure by sex traffickers — in fact, it says the opposite.

After reading the Wilkesboro Police Department’s follow-up post clarifying the context of the video, a handful of people have commented on Parker’s post asking her to delete the video. TikTok creator Jessica Dean, aka @BloodBathBeyond, who debunks trafficking misinformation on TikTok, has also weighed in, “I’m not entirely sure why society collectively agreed that sex traffickers operate in a similar fashion to Wile E. Coyote trying to catch the Roadrunner, but this is overwhelmingly not how trafficking happens,” Dean says in her video. (That particular debunk video has only about 20,000 views, far fewer than Parker’s own TikTok).

In response to this feedback, though, Parker appears to be doubling down: “I have been getting a ton of responses from people trusting their gut feeling and their intuition, so I am going to keep the post up,” she said in a follow-up TikTok, adding “if my post brings awareness [to sex trafficking], then it’s done its job.”

Blatant sex-trafficking misinformation, such as the type of content shared in Parker’s post, is an extremely widespread issue on TikTok, whose algorithm often promotes increasingly sensationalistic content that is more likely to prompt high engagement. Last summer, for instance, the Wayfair sex trafficking conspiracy theory, which posited that sex traffickers were using high-priced Wayfair items as a front for smuggling children, first went massively viral on TikTok; as recently as last April, a rumor that sex traffickers were procuring victims at Target stores across the country also gained traction on the app. “Panicky videos are very engaging,” Abbie Richards, a TikTok misinformation researcher, previously told Rolling Stone. “If you are just watching someone say, ‘Oh my God, this happened to me,’ that’ll go viral. Scary content goes quite viral.”

Such content obscures the reality of sex trafficking in the United States, which is that it rarely involves strangers hiding in dark corners, waiting to snatch unsuspecting victims. Although few reliable numbers are available regarding the prevalence of sex trafficking, according to anti-trafficking organizations like the Polaris Project, the vast majority of victims are disenfranchised people — homeless LGBTQ youth, for instance, or people addicted to controlled substances — who already know their traffickers.

When narratives like the car seat myth go viral, it can do serious harm to actual trafficking survivors, Kate D’Adamo, a partner at Reframe Health Justice who has studied the history of sex trafficking narratives, previously told Rolling Stone. “Not only does it mean that people who are vulnerable to being trafficked are made more vulnerable because they’re [made invisible], we’re also focusing on the wrong place.”

TikTok did not yet respond to Rolling Stone‘s request for comment as to why this particular video, which appears to violate its policies preventing misinformation, is still actively being shared on the platform, despite the source of the misinformation having publicly refuted it. But regardless of whether this particular video will be taken down, unfortunately, the reality of these types of viral narratives — in this case, that two people simply abandoned their old car seat after buying a new one — is a lot less sexy than the idea that strange men are lying in wait to snatch unsuspecting women in parking lots.

“Littering isn’t cool, yo,” Dean says. “Can we just be mad about lazy people instead of making it a grand conspiracy?”