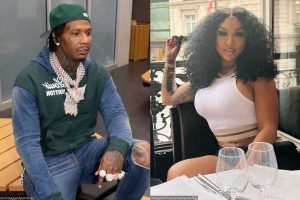 The social media personality, who declared her single status in August, continues to spark reconciliation rumors with the rapper as she gives him a birthday surprise.

AceShowbiz -Is Ari Fletcher getting back together with Moneybagg Yo? The social media personality sparks reconciliation rumors with her rapper ex after she gave him a sweet birthday surprise as he turned 31.

Making use of Instagram Story on Thursday, September 22, the entrepreneur shared a Boomerang of the emcee holding his birthday cake. The musician then re-shared his ex’s post on his own account.

Ari and Moneybagg sparked breakup rumors in March after they stopped following each other on Instagram. The hip-hop pair then appeared to hint at reconciliation multiple times, though Ari recently insisted that she’s single.

“Happy, paid and single! Ready for everything new!” she declared on Twitter on August 26. She seemingly tried to debunk rumors that she and the “Said Sum” spitter have rekindled their romance after they were spotted together at her launch party.

Later that month, Ari denied rumors that she was being sued over a Lamborghini that Moneybagg previously gifted to her. “Okay foreal, y’all are literally stupid,” she tweeted. “How can someone take something from me that’s in MY name? Please stop cause he is not even that type of person. We don’t address y’all on purpose but y’all are dragging it now.”

Moneybagg gave Ari the luxury car as a birthday present back in July 2020. “WTFFFFF!!!!!! I CANT F**KING BELIEVE THIS!!!!!! MY BABY JUST GOT ME A F**KING LAMB TRUCK!!!!!!!!! BIG D**K ENERGY RICH N***A BEHAVIOR!!!!!! I LOVE YOU SO MUCH THANK YOU DADDY!!! @moneybaggyo BEST BIRTHDAY EVER!!! I LAMBOD HER LIFE TOLD HER GET OUT THAT RANGE!!!!!” so she wrote on Instagram at the time. Since then, Ari has been flexing the ride on her social media accounts.