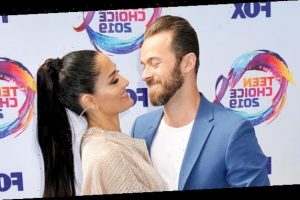 While Artem Chigvintsev is busy dancing up a storm on ‘DWTS,’ he’d rather be spending time with his fiancé, Nikki Bella, and their new baby boy – but he can’t, because they’re off shooting ‘Total Bellas.’

Artem Chigvintsev and Kaitlyn Bristowe delivered a “beautiful” and “graceful” performance on the Sept. 22 episode of Dancing with the Stars but the victory was bittersweet. Instead of celebrating such a fierce foxtrot with Nikki Bella, 36, and their new baby boy, Matteo, Artem said he’s pulling a Billy Idol and dancing with himself at home. “Right now, the little one is actually in Phoenix and not in LA because Nicole will have to shoot a few things for Total Bellas,” Artem, 38, said to reporters following DWTS. “And the [past] couple of days have pretty much like, just by myself, which I find it very, very lonely.”

“I used to come home and just hold a bundle of joy in my hands. And it really just the most amazing thing,” added Artem, before Kaitlyn chimed in to say that Matteo “woke up to watch us dance tonight.” “He did,” said Artem. “He woke up, there was a big watch party today in Phoenix. Nicole and her sister [Brie Bella] and all the babies. And [Matteo] was actually awake to see the dance. I was like, ‘yes, let’s go!’”

Perhaps that was the secret behind Artem and Kaitlyn’s success? Though the 35-year-old Bachelorette star was working with an ankle injury, she got the go-ahead from the show’s doctors and hit the dance floor. She pulled off a foxtrot to Ann Womack’s “I Hope You Dance.” The dance earned praise from the judges, and some high scores, too! The dance earned 22 out of 30 points and tied the team with Justina Machado and Sasha Farber for the overall lead.

Ahead of season 29 of DWTS, Artem gave an update and said that he was already missing his family. “Finally got situated in my trailer for the next, hopefully, 11 weeks,” he said. “Welcome to my house. I need to swap those pictures behind me to Nicole and Matteo’s pictures, obviously, to feel like I’m actually home.” He also posted a picture of Matteo and said that he was “missing my loves already.”

Nikki and Artem welcomed Matteo on July. 31, one day before Brie gave birth to her and Daniel Bryan’s son, Buddy. Sadly, the paternity leave was cut short for Artem when DWTS began back up, but an insider told HollywoodLife that the pro dancer sees this as an opportunity to set a good example for his son. “Being on the show — and hopefully winning — could make sure that Matteo will be all set for any college he wants to go to,” the insider said, “and help him lead to a wonderful childhood. He wants his son to know what it takes to be a hard worker and do what you love.”

END_OF_DOCUMENT_TOKEN_TO_BE_REPLACED

END_OF_DOCUMENT_TOKEN_TO_BE_REPLACED
We and our partners use cookies on this site to improve our service, perform analytics, personalize advertising, measure advertising performance, and remember website preferences.Ok