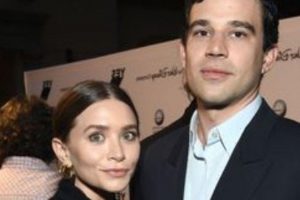 The former actress and fashion designer, 36, reportedly married her partner of five years on 28 December at a private estate in the exclusive area of Bel Air after getting engaged in 2019.

Ashley and Louis kept the number of guest to a minimum as only a few dozen guests attended the event, Page Six reports.

Specifics about the ceremony have been left unknown, but one insider told the publication that “it went late with 50 people or so total.”

Ashley first started dating Louis, an artist and the son of philanthropist Eric Eisner, in October 2017. Not much is known about the couple's private life as they're usually not spotted together.

The first time they attended a red carpet event together was in September last year as they supported the non-profit company, Young Eisner Scholars, which had been set up by Louis' dad.

Ashley first started her career as an actor alongside her twin sister Mary-Kate when the pair was just nine months old. The twins were hired to share the role of Michelle Tanner in the hit sitcom Full House.

The sisters played Michelle for eight years from 1987 until the show ended in 1995.

She and sister Mary-Kate later appeared in several movies together, including Double, Double, Toil and Trouble and It Takes Two until they both retired from acting in 2007, at the age of 21.

Although having appeared in a few films since then, the twins announced that their future was in fashion and not acting.

In 2015, it was announced that John Stamos had signed on with Netflix to produce and co-star in Fuller House, a spin-off of Full House that would reunite the original cast members.

In May of that year, Mary-Kate and Ashley originally announced that they would not reprise their role as Michelle Tanner; however, two months later in July, according to Netflix's Ted Sarandos, the Olsen twins were "teetering" on an agreement to join the series.

The twins eventually declined to join the cast of Fuller House, with Ashley saying she would not feel comfortable in front of the camera after a 12-year absence from acting and Mary-Kate saying the timing was bad.

The twins are not the only successful actors in the Olsen family. Their younger sister Elizabeth Olsen plays Wanda in the popular Marvel series WandaVision.

Elizabeth was originally only signed by Marvel to appear as Wanda at the end of 2014 film Captain America: The Winter Soldier, and said she's still surprised Marvel wants to continue to play Wanda in her own spinoff show.

Elizabeth told Empire: "I mean, I also didn't sign a big contract with Marvel, so I continue to be surprised every time they use me."

When talking about how she was asked to play Wanda in the spinoff series, Elizabeth revealed she was shocked and terrified about the idea.

She said: "It was so terrifying because I got very comfortable taking up my little space, my little lane, in these ensemble films.

"The pressure of leading one only hit me when we were doing press for it, not when we were making it. It definitely feels different than how I started out."