Home » Celebrities » At Work With Darius Van Arman, the Architect of a 'Major Indie' Music Label

At Work With Darius Van Arman, the Architect of a 'Major Indie' Music Label 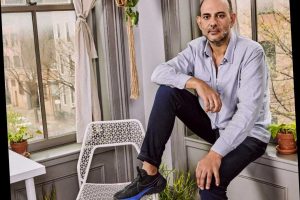 In Rolling Stone‘s weekly series At Work, we go behind the curtain with decision-makers across the fast-changing music business — exploring a range of responsibilities, burgeoning ideas, advice for industry newcomers, and more. Read earlier interviews here.

“Major” and “independent” are normally contradictions in the music industry — but Darius Van Arman’s job is to toe the line. Van Arman is the co-CEO of Secretly Group, an indie label network that’s home to some of music’s most critically acclaimed alternative acts in the U.S., including Bon Iver, Angel Olsen, Moses Sumney, Mitski, and Sharen Van Etten. The company, which comprises the labels Jagjaguwar, Dead Oceans, and Secretly Canadian as well as its own distribution and publishing arms, just added Ghostly International, another indie label, to its umbrella last week. But despite the expansion, Secretly wants to retain its mission of championing indie acts and putting out culturally significant music.

“We think of ourselves as an HBO — very focused on strong repertoire, experimental repertoire, stuff that’s very comfortable being niche or on the fringe of culture moving toward the center,” Van Arman says. “But at the same, it’s a system that every once in a while has the biggest show in the world. That’s what we’re trying to cultivate.” The veteran music executive — who founded Jagjaguwar and has overseen Secretly alongside co-CEO Chris Swanson since 1996 — spoke with Rolling Stone on the company’s delicate balance between two worlds, the intention behind the Ghostly merger, and the biggest existential threats to indie music today.

Where do you see Secretly’s place in this rapidly changing industry?
The Secretly ecosystem’s guiding principle is to do what we can to enable small and medium-sized businesses and individuals to do great things culturally. We don’t want to create a system that’s factory-like, where all sorts of music releases or other kinds of cultural releases are fitting into some sort of system. We want to cultivate small teams working on the level in the very effective way to do great things.

We want to enable scale advantage where we don’t take away creative function. We want to enable a world where these teams are using the same soil, the same water, the same sunshine — but they’re all in their own freaky garden with their own seeds and crazy plants — and let them do what’s culturally interesting.

How does the new deal with Ghostly International feed into that vision?
Ghostly has for 20 years been this beautiful freaky garden of cultural output. I’ve always been artist-first and creativity-first, so we didn’t want to change that DNA at all. Instead we wanted to help Ghostly have access to some of the tools that Secretly Group and Secretly Distribution had access to, like sharing a business affairs team, an accounting team. It’s also sharing functions like managing the buying of digital advertising, which are easy to cooperate on without taking away how Ghostly approaches its decision making on releases, relationships with artists or how to market music. That’s all going to stay very distinctively Ghostly.

Do you think an indie label in this ecosystem can remain truly independent today? Or will we see more consolidation, with labels fold into indie groups like yours or Beggars Group?
I’d hope they can [stay indie]. I hope that world doesn’t change too much from what it is now. Even though we’re finding success in our approach where we create this cooperative system between our affiliated labels, I really feel that it’s possible for there to be great success from companies that stay much, much more independent than that. There are different ways to thrive right now.

Take distribution. With our distribution platform, we support our affiliate labels like Secretly Group, Ghostly International and Numero Group, but we also work with over 100 other artists and labels, and many of those labels have their own smaller ecosystems, and they’re thriving.

Ideally, we see this marketplace that has all shapes and sizes to the companies that are in it. I think it’s really important that we still have an overall music industry environment that is conducive to small, independent labels doing things on their own, in the way they want to do it. Culture is much richer for it.

What does the market look like if that can’t happen, though?
I think that if the music industry keeps on getting bigger, and smaller businesses can’t get off the ground or sustain themselves in small simple way, that’s going to be a very bad outcome for culture and for the music industry. Knock on wood, I don’t see that happening yet. I still believe the environment enables companies to stay small and stubbornly independent. If that starts to change, what do we do about it? That’s a longer conversation on what the role is of government to make sure there’s a balanced marketplace and consolidation doesn’t start to take away all the interesting wrinkles of culture.

At what point does the “indie” distinction go away for Secretly? It seems like the bigger you get, the less indie you can be.
It really depends on what you mean by independent: Some people use the term as shorthand for if you aren’t one of the big three majors right now; others just say if you have a certain share in the marketplace you’re major, and if you have a smaller share you’re not major. That definition is too specific to certain companies. I’m not sure if it really captures what being independent is about.

For me, I think independence is being pro-competitive. You are working within a system where you’re enabling other companies — your competitors sometimes — to be independent as well. And you’re not trying to gobble up market share in order to squeeze competition out. You are investing in a diverse marketplace because you’re comfortable with competition.

But you’re right, as companies get bigger and bigger, the question becomes, what is being lost here? When you traditionally think of independence, you’re thinking of companies that are cutting-edge, innovative, fast, really on the level of the artists — and not corporate or factory-like.

Can Secretly expand much more before you think it’d lose that distinction?
We have about 150 employees right now. One of our competitors, Beggars Group, have 50% to 100% more than we do, and I still view them as very independent. I think there is some place, when we get into the thousands of employees, when you clearly have a different thing than when you have hundreds of employees. Right now, at 150 employees worldwide, we still feel like we’re small enough to have that tight-knit relationship with artists.

At what point does that change? It’s a judgement call. I’m not sure. And there’s a way even if you grow, to still maintain what is essentially independent. That’s why we don’t want Secretly Group, the three labels, to be more than 50 people combined. That’s the target for us, and that’s the same way we’ll operate Ghostly International and Numero Group. For us, it’s really important to maintain those small tribes so that things are very personal and very culturally and creatively connected.

What defines a Secretly Group artist on your label today?
It’s someone who’s a strong leader. It doesn’t mean they have a great following, and it doesn’t mean that everyone listens to every word they say, or that they have commercial power or anything like that. Great leadership is having a vision of where you know you want to go, and then helping everyone come with you to get that vision done. Being amazing storytellers. Being amazing characters in stories, being vulnerable and working well with other team members to help get their story out there in the world. And combine that with iconic voices and brilliant songs and great production taste.

What do you think is the biggest threat to the indie music business? Or the overall business?For both it’s the same answer. I think the biggest threat is market concentration. It’s consolidation of the biggest companies, like the majors, as well as the technology companies, the companies by which people get access to music. You see some of it getting complicated now with the big music tech firms like Tencent and Spotify having their ownership intertwined with Universal and Warner Music Group. You start to imagine a worst case where there’s not a level playing field for small- and medium-sized culture businesses to to have the impact they should have on culture.

What are some tangible initiatives Secretly is taking to address music’s diversity problems? All your co-owners are white men, correct?
Yes. I’m a person of color by the technical definition, but I don’t really say that. I wrote Caucasian on things like college applications. I’m half Middle Eastern. But still, we lack diversity in our ownership. And our senior management has good gender balance, but we also lack race diversity in senior management. We’re in the process of getting an action list as a company — things we are going to do to become better, commit, and be transparent with our employees. A lot of the ideas are coming from employees.

We’re using our voice to support other organizations. We teamed up with Bon Iver’s team and Rhymesayers to donate $30,000 to the four Minneapolis-based organizations to support the community there. But the action list we’re doing is another step in trying to be that shape of a company we think the music industry should be. We’re investigating things like creating a fund to help diverse candidates have access to coaching for interviews. We’ll talk about finding a way to provide a legal resource to artists or songwriters of diverse backgrounds we negotiate with, who may not have a way to pay for good lawyers. That’s tricky, because it’s not like we can select the lawyer we’d negotiate against. Right now we insist artists get a lawyer, but many don’t even know one.

Other ideas we’ve got are hiring recruiting firms to help facilitate finding a more diverse candidate pool when hiring, and we want to have hard conversations about what we are now as a company. What is our makeup? We’re doing a gender gap analysis, which we’ve done for the last two years. It’s a mixed bag — we used to be 50/50 of workers identifying male and identifying female, but nothing intentional, we now have more men than women in our organization. The silver lining is that women are getting paid more than men. The other part of the conversation is, do we invest in a diversity report? How do we do it right? Some employees report, but what if employees don’t self-report, and do we need an outside company to help? We want to get data to employees. You can’t really change things until you understand what you are now, [so you can] set goals to be something different later.