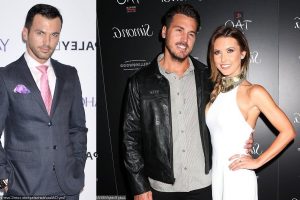 In her new memoir, the ‘Hills’ alum claims that her then-boyfriend Corey Bohan was convinced she had a sexual relationship with her ‘Dancing with the Stars’ partner.

AceShowbiz –Audrina Patridge opens up about her tumultuous relationship with Corey Bohan in her new book. According to the reality TV star, she was accused by her ex of having an affair with married pro dancer Tony Dovolani, who was her partner when competing in season 11 of “Dancing with the Stars“.

Insisting that Corey’s allegations couldn’t be further from the truth, Audrina writes in “Choices: To the Hills and Back Again”, “Tony is a happily married man with three beautiful kids. He’s a real family man – period, full stop.” She adds, “There wasn’t even a hint of anything inappropriate! But he wouldn’t let it go.”

“The Hills” alum says, “Every single day, [Corey] would make rude, nasty comments about Tony and what he was so sure was going on.” She goes on claiming in the book, “Corey accused me of making the dances too sexy and inappropriate, as if I had control over the steps of the tango.”

When she returned from “DWTS” rehearsals or taping, Corey was “always in [her] face,” insinuating that her partnership with Tony evolved from professional to “something sexual.” While he would allegedly unleash on Audrina behind closed doors, Corey would play a supportive boyfriend in the public.

“He acted so loving and proud of me in front of the cameras and the other dancers, before blowing up and yelling at me once we got home,” she recalls, adding that she was “starting to break down” by the end of her time on the dance show.

But that wasn’t the worst Audrina allegedly experienced during her relationship with Corey. In an excerpt of the book, she also claims that the former BMX athlete was cheating on her and was physically abusive.

“I knew he’d been cheating on me with random girls for years,” she pens. “I had stumbled upon naked pictures and dirty text messages in his phone; I had received tips and proof from strangers on social media; and I had heard it from his friends, who were there with him on the late nights and bender weekends. Just like the nighttime wake-ups, it hurt a lot at first. But now, having been with Corey for so long, I felt completely numb.”

She continues, “I was so focused on surviving day to day that it truly didn’t matter what Corey did as long as it didn’t directly affect me – or, more important, [our daughter] Kirra.” But her biggest fear really came when Corey allegedly put his hands on her.

“He got closer and closer, his body changing as he got angrier,” the 40-year-old writes. “His shoulders squared, his chest puffed, his eyes widened and intensified. I felt like the bathroom was closing in on me … Without waiting for his response, I focused solely on getting Kirra out of the room. She was just sitting in my arms, eyes wide, looking back and forth between us quietly. I didn’t want to risk upsetting her, so I remained as calm as I could. But before I could get to the bedroom door, he breezed by me and got there first, slamming the door shut to block our exit.”

“I could feel my heartbeat in my ears, and a shiver went down my spine as he squared his shoulders and narrowed his eyes,” she continues. ” ‘Please,’ I whispered, ‘let me go drop Kirra off. I’ll come back right after, but I don’t want her to see this.’ I knew an argument was coming, and I wasn’t even fighting it at this point. I just desperately wanted to keep Kirra out of it.”

She goes on recounting, “Corey grabbed the backpack I had been packing for the day and shook everything out across the room: my wallet, my laptop, toiletries, everything. I took a small step forward toward the door, and he took a step toward me. Then he pushed me back with a hand on each shoulder. With Kirra in my arms. I stumbled backward, and, for a moment, I lost my breath from the shock. I held Kirra tight in my arms so she wouldn’t fall.”

Audrina says she tried to shield the issue from the public because she “was embarrassed and sad that Kirra had to watch this, that she was in the fray this time when he’d pushed me.” However, “after years of manipulation and emotional abuse,” she says, “I felt shattered to my core, … and the idea of facing paparazzi and the public’s inevitable curiosity just made the process seem ten times harder. But I was finally forced to say enough’s enough and end my marriage.”

Audrina eventually filed for divorce from Corey in September 2017 after less than a year of marriage. Their divorce was finalized in December 2018.