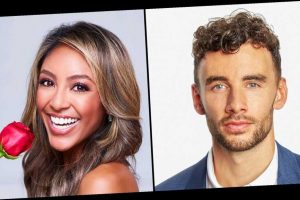 Brendan Morais may have flown under the radar during Clare Crawley’s stint as The Bachelorette, but Tayshia Adams has her eye on him.

Ahead of the Tuesday, November 10, episode of the ABC show, the Bachelor in Paradise alum, 30, exclusively told Us Weekly that she was nervous the remaining 16 men may still have feelings for Clare, who left within the first two weeks of production with Dale Moss.

Tayshia added that she felt “reassured” after spending time with the men.

“They were so happy and excited. And once I had that confidence, I was like, ‘OK, I got this.’ But there were some guys, yes, that were still having feelings for Clare,” the former phlebotomist said. “And so we talked about that as well.”

Tayshia also met newcomers Peter Giannikopoulos, Noah Erb, Montel Hill and Spencer Roberston during Tuesday’s episode. The four men were part of the initial 42 suitors cast for Clare, 39, in July, but were ultimately sent packing before they had a chance to meet her. Us broke the news in July that production reached out to them after the Bachelor Winter Games alum fell for Dale, 32.

During Tuesday’s episode, fans see Tayshia ask Brendan her on a one-on-one date.

“I couldn’t have asked for, like, a better group of men,” Tayshia gushed to Us about the season. “I’ve always said that I want an older, more mature man that has depth and all of these guys have exactly that. It was, like, perfect.”

Scroll through to get to know Brendan: