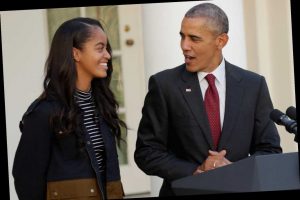 Barack Obama, former United States President, and sometimes embarrassing dad, is giving more insight into his family life this year. Obama, who has been doing interviews promoting his book A Promised Land, appeared on the Bill Simmons podcast this week where he was asked about quarantining at home.

Much to our surprise, the 44th president revealed that Malia's boyfriend actually joined the Obamas for the beginning. Just a casual meet with the parents right? Nothing to see here!

“I think, [like] a lot of families, we went through that first month where we were playing games every night and doing little arts and crafts projects and then slowly, you know, they started to get a little bored with us," Obama explained after being questioned about his favorite part of that time. "Maybe teaching Malia and Sasha, and Malia's boyfriend who was with us for a little while, spades." After the host called this the "biggest revelation of the podcast," Obama went on to explain. "He's British … wonderful young man, and he was sort of stuck because there was a whole visa thing and he had a job set up,” he said. “So we took him in and I didn't want to like him, but he's a good kid. The only thing you discover — this is not a surprise to you, Bill, because you've got a son — young men eat. It's weird to watch them consume food. My grocery bill went up about 30%."

Of course, on top of having classic dad moments like the one above, Obama is often a doting father who brags about his daughter.

In an interview with InStyle he said, "Malia, she is just buoyant. She’s somebody who enjoys people, enjoys life, and enjoys conversation. She’s never bored, which is a badass quality that can take you places."

END_OF_DOCUMENT_TOKEN_TO_BE_REPLACED

END_OF_DOCUMENT_TOKEN_TO_BE_REPLACED
We and our partners use cookies on this site to improve our service, perform analytics, personalize advertising, measure advertising performance, and remember website preferences.Ok