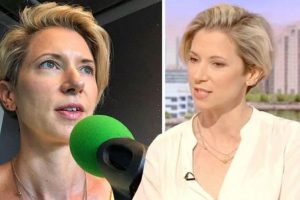 Tunnel 29: The True Story of an Extraordinary Escape Beneath the Berlin Wall

Helena Merriman, 40, has open up about her diagnosis with degenerative hearing condition, otosclerosis. The BBC star had noticed she was getting hard of hearing after the birth of her son Sam, but couldn’t work out why she didn’t wake up to his cries during the night.

Why did it have to be my ears?

A worrying situation for anyone, Helena explained that she went for countless hearing tests to find out what was wrong after realising things were getting worse.

Eventually, her medical mystery was solved but it wasn’t the news she had been hoping for.

In a new interview, the brave presenter recalled the day she found out she had otosclerosis, a condition in which there’s abnormal bone growth inside the ear.

“The consultant in front of me looked at my notes, then told me he knew what had caused my hearing loss: otosclerosis,” she said.

“‘It’s a degenerative hearing condition,’ he said. ‘Genetic, and there’s no cure.'”

According to the NHS, otosclerosis is a fairly common cause of hearing loss in young adults.

While is cannot be cured, the hearing loss it causes can be overcome but it doesn’t make it any less terrifying for sufferers.

Helena admitted she “felt a wave of sadness” in the hours following her diagnosis, wondering whether she would eventually go deaf and if she had passed it onto her children.

“Why couldn’t it be some other part of my body that was going wrong?” she asked herself.

With an established career as a presenter, Helena, who was born with perfect pitch, works with sound on the daily.

“The thought of these sounds slipping away felt terrifying,” she admitted, keeping her diagnosis to herself for a while.

“I didn’t want to make it real by saying it out loud,” she told Radio Times.

“And I couldn’t bring myself to tell people at work because my job as a broadcaster and producer depends on being able to hear.”

After it began to effect her social life, Helena revealed she went to see a specialist who explained that she could have surgery but there was a risk that she could lose all hearing in one ear.

“I went home and thought about this decision. I was in the middle of making a BBC podcast series – Tunnel 29 – about a dramatic escape under the Berlin Wall,” she recalled.

“I had recently returned from Berlin, where I’d been interviewing people about their memories of this.

“Now, I was structuring and scripting the series, and finding sounds and music to immerse listeners in the world of 1960s east Berlin.

“The thought of suddenly losing my hearing in one ear felt too much of a risk, so I decided against the operation.”

Instead, she used this fear as a push to tell people of her condition, and has spent the past year interviewing others who were given a diagnosis.

“The conversations were extraordinary, with accounts of everything from hallucinations to trauma – and seizures to itchy penises,” she said.

“Their stories changed what I thought I knew about so many things – the way our bodies work, how our brains function – but also the astonishing ways in which people deal with adversity and uncertainty.”