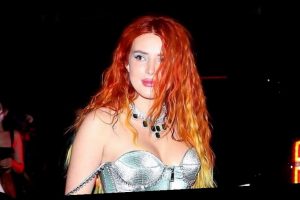 The 23-year-old actress and singer stepped out in a flashy blue corset and matching pants in the couple’s first outing since their engagement.

The pair were first linked in 2019 after being spotted locking lips in San Diego a few days after announcing her split from Mod Sun. They became Instagram official in June of that year.

Their reps denied rumors of an engagement in July 2020. The couple also were seen enjoying a Mexican getaway together over the summer.

Bella recently spoke out about the NYT documentary Framing Britney Spears during an interview and opened up about her own experience as a child star.