Home » Celebrities » Ben Affleck and Ana de Armas Have Broken Up! Over the Phone!

Ben Affleck and Ana de Armas Have Broken Up! Over the Phone! 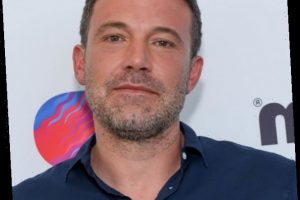 Someone get Ben Affleck an extra helping of Dunkin Donuts.

We’re pretty sure he needs it right about now.

According to numerous outlets, the veteran actor has split from Ana de Armas after approximately one year of dating, with E! News alleging that the parting of ways really was mutual.

“Both of them have completely full lives in a good way,” an insiderr told E! News on January 18. “There will always be that love.”

Well, sure. That’s what everyone says at times such as this.

Is it reallly true, though? We can’t say for certain.

“They have had numerous discussions about their future and they decided together to break up,” another source tells People Magazine, also making the split sound rather amicable.

The twosome — who first met while filming the upcoming thriller Deep Water in New Orleans in early 2020 — had been romantically linked since early March 2020.

At the time, they were spotted on a trip to her native Cuba.

They were then seen making out in Costa Rica, signaling that things had turned at least fairly seriious.

Affleck and de Armas were often seen together during the summer because they both spent the quarantine period in Los Angeles.

The Knives Out actress confirmed their relationship on Instagram in April when she shared photos of them hanging out for her 32nd birthday.

“They have been kissing, cuddling up together and putting their arms around each other a lot,” a witness told E! last spring, adding:

“They look at each other adoringly and like taking pictures of each other.

“Ben seems blissfully happy and giddy. He can’t stop smiling and laughing. He is clearly is very into Ana.”

Heck, not only had de Armas met Afflleck’s three kids… in June, she joined Affleck, these childrren and his mom on a family vacation to Georgia.

“Ana seems to love being around his kids. Everyone has been getting along great. Ana is making an effort to get to know his kids,” a source told People at the time.

So… where did things go wrong?

However, Us Weekly alleges that the actress initiated the break-up and multiple websites report that it actually took place over the phone.

Still, there are no hard feelings of any kind on either side.

A source told People on Monday that their decision to separate was “mutual and something that is completely amicable,” concluding:

“They are in different points in their lives; there is deep love and respect there.”