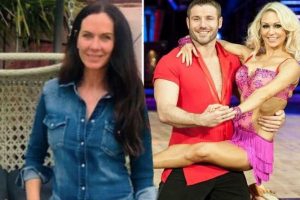 Abby Cohen made the comment after, she claims, a journalist harassed her about former husband at the time Ben Cohen and Kristina Rhianoff’s relationship. The pair got together after dancing as a duo on Strictly Come Dancing back in 2013.

At the time of the show, he was still married to Abby, with the pair divorcing three years later.

In 2015, Ben Cohen’s now ex-wife claimed he betrayed her with 43-year-old Kristina.

She told The Sun on Sunday: “My husband, who I was with for 23 years, unconditionally loved and was completely loyal to in every respect, has left me for a f***ing Russian dancer.

“The last two years have been the most traumatic thing to ever happen to me.

“He’s done the dirty on me. I want people to know.”

She told New Magazine: “At the time of the break-up, when hugely stressed, I once angrily referred to Ben’s partner as a ‘f***ing Russian dancer’ to a journalist hassling me. I regret that now.”

She went on to say: “I’m happier in my own skin and I’m not that broken girl who used to be married to a famous rugby player.”

Ben and Abby, who married in 2003, share two children together; 13-year-old twins Isabelle and Harriette.

Due to their co-parenting, the rugby star’s ex said she still has to see her rugby player ex, but hasn’t seen the dancer since the show.

“When we hand over the kids I sometimes see a little of the old Ben and it makes me feel sad, but I breathe deeply and get on with my day,” she added.

Kristina and Ben have always denied that they had an affair amid claims they fell victim to the so-called Strictly Come Dancing curse.

The “curse” has been used to describe relationship break-ups involving the contestants or professionals.

The couple have said their romance started after he and Abby broke up.

At the time of their split, a statement read: “Ben and Abby Cohen have agreed to take time apart to deal with some marital issues but remain fully committed to the welfare of their children.

“There is no third party involved and Ben and Abby now ask that their privacy and that of their family be respected at this difficult time.”

Earlier this year, the dancer recalled the abuse she received when her relationship with Ben hit the headlines.

The ex Strictly star said she was branded a “homewrecker” amongst other things by strangers on the internet.

“It’s a horrible feeling. You feel like the whole world is pointing fingers at you.

” A lot of people who judge others – whoever they judge – never really know the full story or the situation,’ she told Closer Magazine.

“It was very full on and a challenging time, especially as I was still on Strictly every Saturday night and performing in front of 13 million people on the biggest show on TV.

“I got through it with inner strength and supportive friends who know the real me.”