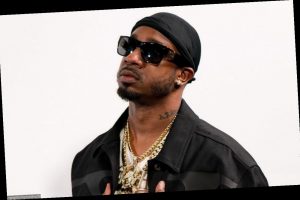 The ‘Burden of Proof’ rapper has been discharged from hospital after being treated for gunshot wound on his leg following an incident at a Walmart store in Houston, Texas.

AceShowbiz -Rapper Benny the Butcher has been discharged from hospital after being shot in a robbery gone wrong on Saturday, November 14.

Houston police officials in Texas confirmed the New Yorker was injured during an incident at a local Walmart store, when he and his associates were approached by five armed men who demanded their jewelry as they left the store. Houston Police spokeswoman Jodi Silva said that the group started to remove their chains, but weren’t moving fast enough for one of the robbers, who shot Benny in the leg.

After the shot was fired, the alleged robbers fled the scene. Benny and his friends initially ran away too, but they eventually pulled over and called the police. They took the member of hip-hop group Griselda to a hospital for treatment.

The rapper’s condition was not immediately known following the shooting, as Wale sent his fellow hip-hop star Benny a prayer. “Wishing @BennyBsf a speedy recovery,” he tweeted on Sunday.

Cops are investigating the shooting but have yet to make any arrests.

On the same day Benny got shot in the attempted robbery, another rapper, Boosie Badazz (Lil Boosie), also became a victim of shooting. The Baton Rogue star was shot in the leg during a trip to Dallas on Saturday.

The 38-year-old and his entourage were fired upon in the parking lot of Big T’s Plaza shopping mall, according to TMZ. He was in town to pay his respects to late rapper Mo3, who was shot and killed on Wednesday.