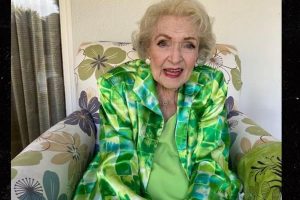 Betty White was all smiles just days before she died, as seen in a newly revealed photo … one of the last ones to document her life, in fact.

The late actress’ assistant took to Facebook Monday with a post in honor of what would’ve been Betty’s 100th birthday, and she threw up the pic of Betty she says was snapped 11 days before BW passed away on NYE.

The caption reads, “Hello Everyone! It’s Kiersten. Betty’s Assistant. On this special day, I wanted to share this photo of Betty. It was taken on 12/20/21.” 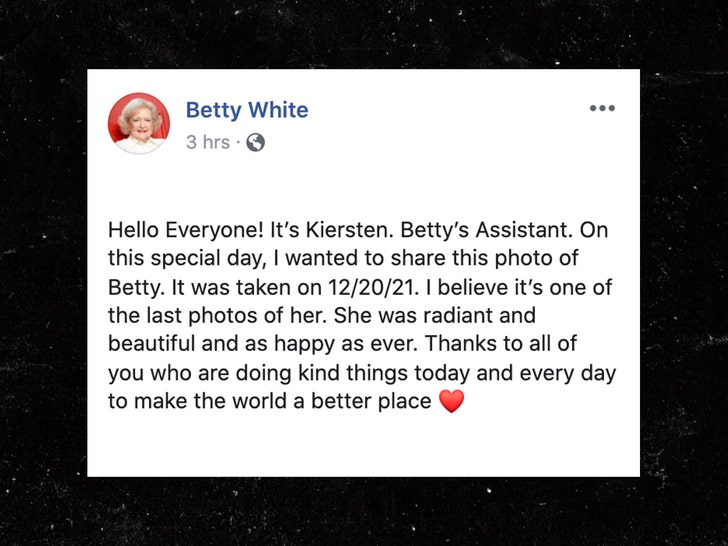 Kiersten adds, “I believe it’s one of the last photos of her. She was radiant and beautiful and as happy as ever. Thanks to all of you who are doing kind things today and every day to make the world a better place ❤️”

If her date is correct, that would mean this was captured just a few days before Betty suffered a stroke, which is what ultimately led to her death nearly a week later, per the L.A. County Medical Examiner.

It’s a pretty insightful snapshot if you think about it, as it seems to be one of the final times Betty appeared on camera. Funny enough, the very next day … Betty is said to have filmed a little thank-you for fans as part of the new movie ‘Betty White: A Celebration.’

The flick, which hits theaters on Monday, is a highlight reel of her life — and the director, Steven Boettcher, said Betty recorded her message 10 days before passing on the 31st.

Just like here, she seemed to be in great spirits for the shoot. RIP