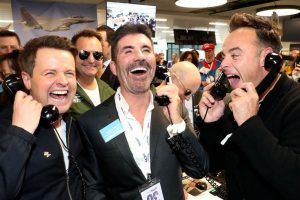 Britain's Got Talent presenters Ant McPartlin and Declan Donnelly reunited with judge Simon Cowell at the ICAP Charity Day in London on Wednesday.

TV duo Ant and Dec, both 47, headed to the organisation's headquarters in the capital city to attend the 30th annual charity day.

The event raises money for charities all across the globe, with 100% of ICAP's revenues and 100% of its brokers' commissions generated on the day being donated to over 100 different charities.

Now in its 30th year, the charity day has raised over £155 million and has made over 2,800 donations to more than 1,700 charities worldwide.

Celebrities join the charity's broking teams at the headquarters in London to try and help to close deals with clients.

Ant and Dec are Goodwill ambassadors for The Prince's Trust while Simon, 63, is Vice President of the Shooting Star Children's Hospices charity.

The trio were photographed laughing together as they took calls during their visit to ICAP's trading floor on 7 December.

They were joined by a string of fellow famous faces, including Holly Willoughby, Abbey Clancy and Keith Lemon.

Like Simon, Keith was also representing Shooting Star Children’s Hospice, while Holly, 41, was representing The Prince's Trust, of which she is an ambassador.

Gaby Roslin was spotted picking up the phone in support of Alzheimer’s Research UK, along with Barbara Windsor's husband Scott Mitchell, who was also representing the charity.

Actress Olivia Colman, who is an ambassador for domestic abuse charity Refuge, was also present at the event, while former boxer David Haye accepted calls on behalf of Prostate Cancer UK.

Prince William was among those congratulating ICAP on its 30th charity day, and in a message shared on Twitter he thanked the organisation for including charity The Passage, which he is a patron of.

The Prince of Wales, 40, said in the clip: “As patron of The Passage, I have seen first hand the vital work that they do to support people who are street homeless. It is a mission that has never been more important, that’s why I am very grateful to ICAP for supporting The Passage in this their 30th year of charity day.

“Since 1993, ICAP charity day has raised over £155 million for thousands of incredible causes across the globe and have supported millions of people. It’s a legacy to be proud of and one that continues right now.”