Home » Celebrities » Big Brother Recap: Did a Last Minute Flip Save the Target?

Big Brother Recap: Did a Last Minute Flip Save the Target? 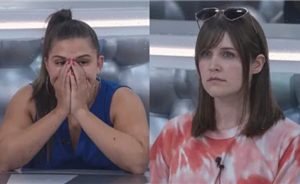 This has been the best week of Big Brother.

It was genuinely unpredictable who would be going home due to the flip-flopping in the house.

Derek X is not afraid to make big moves. In a house filled with a majority alliance, that’s the real shocker here.

Thursday’s new episode picked up with the delayed Veto meeting. Christian had given Derek X another offer as Sarah Beth worried she was about to be sent home.

Ultimately, Derek X stuck to his word and sent Christian to the block after Britini used the Veto on herself.

In the aftermath, Christian recognized he only needed three votes because Alyssa and Xavier would vote to keep him.

Britini and Derek F explained they would keep in the house, leaving Tiffany as the supposed swing vote, along with Claire.

Tiffany was visibly upset at being put in this position because she knew the people saying they would keep him hadn’t truly made up their minds, so if Christian left, he would be leaving, thinking Tiffany did him dirty.

In a truly wild scene, she explained to both Britini and Derek F that she would be telling the truth the next time Christian asked.

She followed through on the plan, and it started to cause problems in the Cookout alliance.

Derek F and Azah then seemingly sealed the fate of the alliance when Christian tried to get Britini up to the HOH room.

Tiffany was working on a vote flip to keep Christian in the house, and she wanted to speak to Britini alone to see whether she would be interested in keeping Christian.

Derek F and Azah decided against letting Britini go up alone, which caused another big issue for the alliance.

Claire was on board with keeping Christian, as were Alyssa and Xavier. Those three votes, along with Tiffany’s, meant they still needed one more.

Derek F flipped out because Tiffany wanted a private conversation with someone outside the alliance.

It was quite an episode, but at the eviction, Christian was sent packing. Only Xavier and Alyssa voted to keep him.

On his way out the door, Christian announced that he expected the move, but he also respected Derek X.

Julie revealed that the Big Brother Jury has begun, meaning everyone else in the house has made it that far.

Claire’s power is well, and truly up, so she’s in a world of trouble if someone she’s not aligned with wins the HOH.

We never even got the HOH competition in the episode, which sucked, but at least we have a hook to keep us waiting until Sunday.