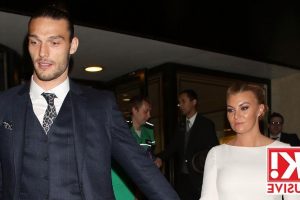 Friends of Billi Mucklow are insisting that she postpones her upcoming wedding after photographs of her fiancé Andy Carroll in bed with two other women were posted last week, a source has told OK!.

The snaps of the former England striker, 33, whom former TOWIE star Billi, 33, is set to tie the knot with in just two weeks' time, showed him intoxicated in bed beside blonde Taylor Jane Wilkey.

Now, a source close to Billi has revealed she's feeling "totally embarrassed" and "humiliated", and that her pals are encouraging her to call off the big day.

The news comes after Billi was spotted without her engagement ring.

"She’s waited a while and they’ve been together a long time. But her friends and family are telling her to postpone the wedding.

"They think she should put it on hold and wait. They don’t want her to look like a mug."

The source continued: "Billi wants more answers. She feels totally embarrassed. She was so happy and was posting all the pictures from her hen do on Instagram, but she feels really humiliated now.

"It’s a tough time for her. Billi is torn as she’s thinking that if she postpones it, it might not ever happen."

Earlier this week, Billi, who shares three children with the ex-Liverpool player and is step-mother to his two older kids from a previous relationship, allegedly wiped all traces of her husband-to-be from her WhatsApp profile, changing her picture from a snap of him to one of their children.

Taylor told The Sun on Sunday that she and Carroll had passed out after spending 12 hours drinking alongside the West Bromwich player, but that the photographs were a joke and nothing sexual had occurred between them.

Carroll had reportedly invited Taylor and her friend, Phoebe Robb – along with several other members of the stag-do party – up to his Dubai hotel suite to continue the night out.

Taylor has since insisted: "It was an afterparty. We all went back to his hotel. There was me, Andy and my female friend. I didn’t sleep with him, it wasn't like that.

"There was three of us in the room. It was a full day and night of drinking. Andy was steaming. We were all drunk. We went back to Andy's suite and we played some music and he got into bed and passed out. I was there with my friend until the early hours and took the photo as a joke."

For all your updates on Andy Carroll and Billi Mucklow, sign up to our daily OK! newsletter.