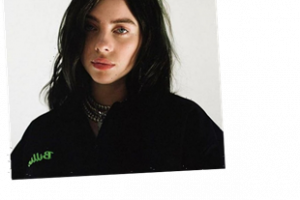 Celebrity takes on these impassioned nationwide protests have ranged from being right on the money to being tone deaf or even vicious.

Billie Eilish, one of the most accomplished young musicians on the planet, is taking “All Lives Matter” racists to task for this pernicious motto.

“I’ve been trying to take this week to figure out a way to address this delicately,” Billie begins.

“I have an enormous platform,” she writes to her 63.6 million Instagram followers and anyone else reading.

“And,” she explains, “I try really hard to be respectful and take time to think through what I say and how I say it.”

Notably, all lives matter is a phrase that did not crop up until the Black Lives Matter movement took form, as a tactic to silence BLM.

Also, over the weekend, a white man declared “all lives matter” before trying to shoot black men with arrows.

“Will you shut the f–k up?” Billie righteously demands.

“No one is saying your life is not hard.”

“No one is saying literally anything at all about you.”

“All you mfs do is find a way to make everything about yourself.”

“Society gives you privilege just for being white,” Billie acknowledges.

Contrary to what many people’s knee-jerk reactions claim, this is true.

“You can be poor,” she explains, “you can be struggling.”

“And,” Billie continues, “still your skin color is giving you more privilege than you even realize”

“And nobody is saying that makes you better than anyone,” Billie says.

“It just lets you live your life,” she reasons.

Billie explains that those of us who are white can go through life “without having to worry about surviving simply because of your skin color!!!”

“You are privileged!!” she explains.

“If all lives matter,” Billie poses the question, “why are back people killed for just being black?”

“Why are immigrants persecuted?” she asks.

Billie goes on to ask: “Why are white people given opportunities that people of other races aren’t?”

Those of us who are white are given the benefit of the doubt in situations where people of color are not.

“Why is it okay for white people to protest literally being asked to stay at home while carrying semi-automatic weapons?” Billie asks.

She is referring to the heavily armed goons who stormed government buildings in a menacing display of their “rights” with no pushback from police.

She then asks: “Why is it okay for black people to be called thugs for protesting the murder of innocent people?”

“We have to address hundreds of years of oppression of black people,” Billie explains to her fans and followers.

Then, as if having to explain it to a small child, she writes: “The slogan of #BlackLivesMatter does not mean other lives don’t.”

She affirms: “And they f–king do.”