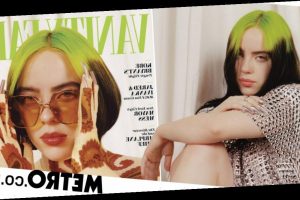 Billie Eilish has opened up about taking ‘weight loss’ pills when she was just 12 years old.

The star found fame at a young age, beginning her career at 14, with hit single Bad Guy soaring to the top of the charts around the world four years later.

Last year, rare paparazzi pictures emerged of the 19-year-old heading out in LA, rocking a vest top and shorts as she made her way to the beach – with the reaction from all corners of the internet causing a stir.

Discussing her feelings about the images, in which she traded her trademark baggy clothes for a different look, she candidly discussed her relationship with her body, and how this has changed drastically over the years.

‘I think that the people around me were more worried about it than I was, because the reason I used to cut myself was because of my body. To be quite honest with you, I only started wearing baggy clothes because of my body,’ she told Vanity Fair.

‘I was really, really glad though, mainly, that I’m in this place in my life, because if that had happened three years ago, when I was in the midst of my horrible body relationship – or dancing a ton, five years ago, I wasn’t really eating. I was, like, starving myself.

‘I remember taking a pill that told me that it would make me lose weight and it only made me pee the bed – when I was 12. It’s just crazy. I can’t even believe, like I – wow. Yeah. I thought that I would be the only one dealing with my hatred for my body, but I guess the internet also hates my body. So that’s great.’

When it was suggested that the internet ‘might hate all women’s bodies’, the teenager simply added: ‘The internet hates women’.

Following the pictures in question emerging, last October, a conversation was sparked over body image.

Adding to the discussion, Billie took to her Instagram page and urged people to start ‘normalising real bodies’.

‘Not everybody has a wagon behind them, okay? Guts are normal. They’re normal.

In the caption on her original post, Chizi added: ‘In case someone needed a reminder…. ‘Instagram has warped a lot of y’all into thinking NORMAL bodies are abnormal. NO.

‘Not every Black girl has a shelf behind them. Stomach pudge is completely normal.

‘Most boobs SAGGGG. And to all my mamas out there, it’s ok! You brought LIFE into this world sis.’

Read the full interview of Vanity Fair on newsstands and digital download from January 29.