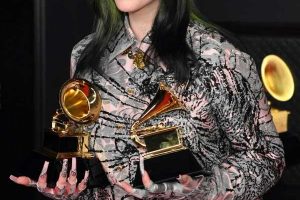 Get ready, everyone, because new music from Billie Eilish is coming! On Tuesday, April 27, fans noticed billboards announcing the singer’s second studio album began popping up in various cities across the world. Eilish later confirmed the release on Instagram. If you can’t wait to listen to her next project, here’s everything you need to know about Billie Eilish’s Happier Than Ever, including its release date, tracklist, cover art, and more.

Eilish first revealed she was working on new music while appearing on The Late Show With Stephen Colbert in February 2020. The singer said she had a lot of free time to work on her second album due to her 2020 Where Do We Go? world tour getting canceled because of the coronavirus pandemic.

"I don’t think I would’ve made the same album, or even the album at all, if it weren’t for Covid," Eilish told Stephen Colbert on the show. "That doesn’t mean it’s about Covid at all, it’s just that, when things are different in your life, you’re different. That’s just how it is. So, I have to thank Covid for that."

When Eilish dyed her hair platinum blonde on March 17, fans thought it was a sign her new era was coming. As it turns out, they were right because this summer, Eilish will drop her second full-length album. Check out all the details surrounding Happier Than Ever below.

Happier Than Ever Release Date

Eilish revealed her second album’s release date on IG. "MY NEW ALBUM ‘Happier Than Ever’ OUT JULY 30TH!" Eilish wrote. "This is my favorite thing i’ve ever created and i am so excited and nervous and EAGER for you to hear it. I can’t even tell you. i’ve never felt so much love for a project than i do for this one. hope you feel what i feel."

Happier Than Ever Tracklist

Eilish hasn’t unveiled her album tracklist yet, but it seems her newest single, which comes out on Thursday, April 29, will be featured on it.

Happier Than Ever Cover Art

Along with her album announcement, Eilish shared the cover art for Happier Than Ever on IG. Fans were happy to see it pictured the singer with her new blonde hair.

How To Pre-Order Happier Than Ever

Now that you know the details about Eilish’s upcoming release, you’re probably wondering how you can pre-order it. Physical copies are available to pre-order on Eilish’s official website. You can also pre-save Happier Than Ever through iTunes, Amazon Music, and Spotify.

Mark July 30 in your calendars because Eilish’s new era is going to be epic!