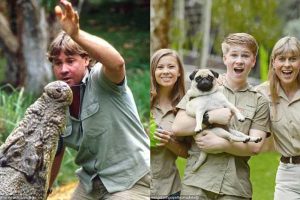 The beloved wildlife expert died at 44 on September 4, 2006 after being attacked by a stingray off the coast of northern Australia while working on the documentary series ‘Ocean’s Deadliest’.

“Today is #SteveIrwinDay,” Robert shared on Instagram with a throwback photo of himself, dad Steve and Bindi. “Thinking a lot about my Dad today and the impact that he made on our planet, inspiring an entire generation.”

The wildlife photographer added, “I also think about what a truly amazing dad he was. Through a lifetime captured on camera and stories from my family and those who knew him best, I’m able to remember the special times with dad.”

Concluding his message, Robert wrote, “I still look up to him every day and while I miss him so much, it means the world to me and my family that each year we can have a day for the world to celebrate what he stood for.”

As for Bindi, the 23-year-old wrote her own heartfelt post on her page. “Your legacy will live on forever. I love you for even longer. November 15, Steve Irwin Day,” the mom to 7-month-old Grace Warrior said alongside a smiling picture of her and her dad by the ocean.

Steve died at 44 on September 4, 2006. The beloved wildlife expert was attacked by a stingray off the coast of northern Australia while working on the documentary series “Ocean’s Deadliest“.

In 2019, Bindi said, “Dad was my hero and the greatest Wildlife Warrior. It’s a blessing to continue his work with my amazing family. We hope to make him proud every day. We are celebrating with lots of khaki and animals! Khaki’s not just a color, it’s an attitude!”

Meanwhile, Robert said at the time, “Steve Irwin Day is one of the most special days of the year for our family. Dad was the ultimate Wildlife Warrior and so ahead of his time — discussing climate change, habitat destruction and so many other environmental issues before they were as widely discussed as they are now.”

He added, “He changed the world and so many lives across the globe. For my family and me, we miss him every day, but are proud to keep his mission alive. It’s wonderful to see so many people showing their support for his legacy.”