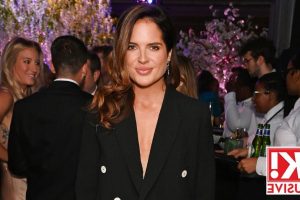 Made In Chelsea veteran Binky Felstead is said to be feeling "incredibly stressed" as her wedding celebration to husband Max Darnton quickly approaches.

With the former reality star having been forced through a number of devastating blows in recent weeks – including her dog Pedro being hit by a "vile" van driver and her son Wolfie being rushed to hospital following an allergic reaction – a nearby source has exclusively told OK! that she has turned to friends and family for support.

"Binky will be feeling incredibly stressed," they told us. "She has a wedding to organise, her dog nearly died and now her son had been rushed to hospital. I think the whole thing will be feeling overwhelming for her.

"She will be leaning on her friends and family for support. She’s incredibly close to her mum, so she will be doing what she can to support her and be there for her. And Max of course.

Our source added: "He’s such an amazing dad and really knows Binky inside out and what to do in the harder times. It’s an awful lot of stress on one person."

Binky, 32, and Max, 31 – who share one-year-old Wolfie and co-parent Binky's India, five, along with ex-partner Josh Patterson – officially tied the knot in a civil ceremony in June last year, just seven weeks after the birth of their son.

Despite this, recent months have seen the pair have been in the midst of organising a celebratory party with all of their friends and family in Corfu, but worrying unforeseen events have reportedly taken their toll on bride-to-be Binky.

"It’s one thing after the other," our source explained. "When it’s the run-up to your wedding, you want it all to be perfect, but instead, it’s all hitting the fan at once.

"When you’re planning, you’re worrying about whether the catering will turn up, the DJ isn’t going to cancel. But things like this throw such a spanner in the works, and it’s never what you’d imagine you’d be dealing with so close to the wedding.

On Tuesday 21 June, mum-of-two Binky told her Instagram followers of the moment her pet dog Pedro was brutally mowed down by a "vile speeding" van driver in a horror hit-and-run incident that left him requiring life-saving surgery.

Less than a week later, she was then forced to call 999 for son Wolfie who was suffering with a severe allergic reaction to some hummus.

Sharing photos showed her son's swollen and red face – as well as another which saw him cuddling dad Max – Binky wrote: "Blimey- Looking forward to a new week!!

"What with Pedro being hit by a van … now Wolfie being rushed off in a ambulance after a bad reaction to what we think is the sesame in the hummus he had at lunch."

Our nearby source continued: "Binky will be feeling stressed and a little bit hard done by.

"It shows that it doesn’t matter how perfect your life may seem, bad things can happen to anyone and it’s all things we have to deal with in life."