Home » Celebrities » Boosie Badazz Laughs Off Death Threats From LGBTQ+ Community, Details How They Want to Kill Him

Boosie Badazz Laughs Off Death Threats From LGBTQ+ Community, Details How They Want to Kill Him 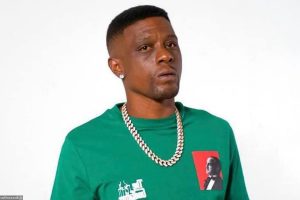 AceShowbiz -Boosie Badazz (Lil Boosie) is seemingly not afraid of death threats that he received from the LGBTQ+ community. In a surfacing clip of his interview, the Baton Rouge rapper couldn’t help but laugh when detailing how they wanted to kill him.

When sitting down with VladTV, the 39-year-old was asked whether he actually got death threats from “gay people.” In response, the emcee shared, “Yeah, I’ve been getting death threats about nine months now.”

The host then pressed him about what the senders said to Boosie. The “Youngest of da Camp” artist then disclosed, “A lot of them say they will stab me up.” Finding it funny, he burst into laughter.

Boosie previously divulged that he has received death threats from online trolls following his homophobic rant against Lil Nas X. “All my gay fans love me,” he said. “I don’t even know where the other hate be comin’ from…I don’t have problems from gay people when I see them. I really just have problems on social media.”

“I’m proud to be the person to speak up for people who can’t talk,” Boosie boasted, before admitting that his mom was unhappy with his remark about the openly-gay rapper. “You know, my momma tell me ‘shut up.’ My momma told me the other day, ‘Shut the f**k up.’ Called my phone… ‘Shut the f**k up. Stop talking about all that s**t,’ ” he recounted.

Remaining defiant, the “Wipe Me Down” spitter recalled telling his mother, “You sit down, ma. I don’t want to hear that.” He then added, “You know, not trying to be disrespectful to my mom but I hung up on her.”