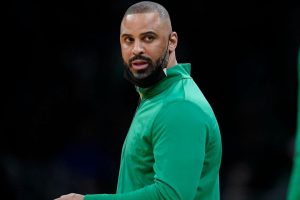 The Boston Celtics officially put its second-year head coach on suspension for the entire 2022-23 NBA season after reports claim he engaged in an improper relationship with a female staff member.

AceShowbiz -Celtics coach Ime Udoka is facing disciplinary action amid allegations that he cheated on his longtime partner Nia Long. The Boston Celtics have announced that the second-year head coach is suspended for the entire 2022-23 NBA season for violations of the team’s code of conduct.

The decision was announced on Thursday night, September 22 after reports claimed that Ime engaged in an improper relationship with a female staff member, which is deemed a violation of the code of conduct. Assistant coach Joe Mazzulla will serve as the team’s interim head coach in Ime’s absence, according to ESPN’s Adrian Wojnarowski. The Celtics said a decision about Ime’s longterm future with the team beyond the 2022-23 season “will be made at a later date.”

Following the team’s decision, Ime issued a statement in which he apologized for his behavior. “I want to apologize to our players, fans, the entire Celtics organization, and my family for letting them down,” the 45-year-old said. “I am sorry for putting the team in this difficult situation, and I accept the team’s decision. Out of respect for everyone involved, I will have no further comment.”

The Athletic’s reporter Shams Charania was the first to report Ime’s alleged relationship with an unnamed female staff member. Upon the release of the story on Wednesday, it was reported that Ime considered resigning from his position, according to Sports Illustrated’s Chris Mannix, though he ultimately decided not to resign.

Ime was quickly dragged on Twitter, considering his longtime relationship with actress Nia Long, with whom he shares a son, born in 2011. They became engaged in 2015 after dating since 2010.

One person, who mistakenly thought Ime and Nia have been married, responded to the cheating allegations, “When your wife is Nia Long? Yes. I recommend jail time.” Another similarly pushed for severe punishment as tweeting, “Ime Udoka cheated on Nia Long? Ban him for life.”

Football star Kerryon Johnson also weighed in on it, saying, “Can’t even cap bruh cheating on Nia Long is absolutely ludicrous…as a player I wouldn’t listen to NOTHING he say to me ever again.” TV presenter and journalist Nina Parker added, “Cheating on Nia Long? End of days has to be upon us. Because ain’t NO WAY.”

Nia has not spoken up on the reports of her fiance’s alleged affair.