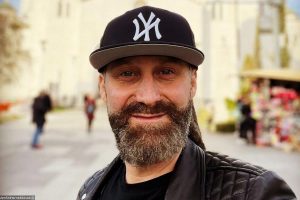 Fully awake after a five-hour surgery, the ring announcer realizes ‘it’s going to be a tough road’ as he has to learn to walk again after seriously injured in the accident.

AceShowbiz –David Diamante is likely not going anywhere this coming holidays. The prominent boxing announcer was recently involved in a serious motorcycle accident that has left him with “a bad injury.”

The 50-year-old, who has worked for ESPN, DAZN, Showtime, HBO, the Brooklyn Nets and many others, was riding on Third Avenue in Brooklyn beneath the Brooklyn Queens Expressway on Monday, December 20 when the accident happened, according to Boxing Scene. Details of the crash were not divulged.

David was rushed to NYU Langone Health in critical condition. He suffered from three fractures to his spine, multiple broken ribs and serious damage to his right knee. On Tuesday, he underwent a five-hour surgery during which nine screws, multiple rods and cadaver parts were inserted in his spine.

Thankfully, David is now awake and alert. Speaking to the outlet on Wednesday, the ring announcer admitted that his recovery is going to be “a tough road” as he has to learn to walk again and it will take some time, but he keeps a positive attitude.

“It’s going to be a tough road,” he shared. “It’s a bad injury and getting better will take some time. This will be a struggle. I’ll have to learn to walk again, and right now there’s a risk of complications. But I have a positive attitude and will be back as soon as possible.”

The boxing community has since sent him well wishes for his speedy recovery. Sports writer Kevin Iole tweeted, “Praying for you @daviddiamante Fight hard and get well soon!!” Irish professional boxer Katie Taylor wrote, “One of the great guys in boxing. Wishing you a speedy and full recovery @daviddiamante.”

Boxing promoter Lou DiBella added, “Prayers up for @daviddiamante who’s just begun recovery from a awful motorcycle accident. Positive energy to him for a swift recovery and rehab. He has very serious injuries, but sounds good, can move everything, and his prognosis, with time and work, is good. Miracle.”