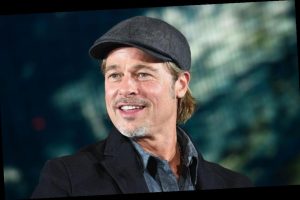 Long before Brad Pitt won an Oscar and Jason Priestley became synonymous with a certain zip code, the two struggling actors shared the rent with some other pals in North Hollywood. Now each with their own claim to fame, Pitt and Priestley apparently competed for more than acting roles when they roomed together.

While promoting his 2019 film Once Upon a Time in Hollywood for which he won an Academy Award, Pitt reflected on starting out in showbiz.

“You know, when I first moved out here, it was the summer of ’86 and I didn’t know [expletive]-all about Los Angeles, other than what I’d seen on The Beverly Hillbillies and Dragnet,” Pitt told the Los Angeles Times. “I landed in Burbank at a house I could crash at for a month or so. … Man, I was just so up for the adventure, and so excited when I’d drive by a studio where they make movies. It meant the world to me.”

Soon the Thelma & Louise star decided to move on to North Hollywood, where he wound up as one of eight roommates in a Klump Regency apartment.

“I moved and it was one of those eight guys in a two-bedroom apartment in North Hollywood kind of things,” Pitt recalled. “You have your little corner where you keep your clothes folded up in a little bedroll. I became quite accustomed to McDonald’s and Shakey’s Pizza buffet. I didn’t mind. The city was a wide-open experience.”

Priestley remembered his time boarding with Pitt, revealing they had to stick to a cost-effective budget.

“We lived on Ramen noodles and generic beer—the kind that came in white cans labeled ‘beer’—and Marlboro Light cigarettes,” Priestley wrote in his memoir, according to Interview. “We were broke.”

Though both actors hit it big, Pitt went toward the big screen while Priestley made his mark on television, which eventually brought an end to their male bonding.

“Brad went off and was making movies all over the world, and I was sort of stuck in one place making a TV show … and it was back in the days before computers,” Priestley told the Huffington Post in 2017. “It kind of tore apart our whole group of friends that we had.”

Priestley seemed to regret the breakup of the brotherhood. “The fact that the two of us went off and got strangely famous — we had a pretty good group of friends and all of a sudden we all sort of dissipated, and it was sad,” he said.

Since Pitt and Priestley were both constantly pursuing auditions, they often found themselves competing for the same role. The rivalry seemed to morph into other areas of their lives.

“Just for fun, we used to have competitions over who could go the longest without showering and shaving,” Priestley wrote in his memoir. “Brad always won. Having to go on an audition meant cleaning up, which is what usually put an end to the streak.”

Though the group of eight went their separate ways, Priestley still holds those early days of chasing fame in high regard.

Sunday- on a plane once again…heading back to #thesix to get back to #PrivateEyes… #stayinschoolkids. #dadlife

“We were all struggling and all sort of messing around in Hollywood,” Priestley said. “Those were really fun days, and I think, ya know, those friendships that we all formed and those times that we all had are times that I look back on fondly.”

END_OF_DOCUMENT_TOKEN_TO_BE_REPLACED

END_OF_DOCUMENT_TOKEN_TO_BE_REPLACED
We and our partners use cookies on this site to improve our service, perform analytics, personalize advertising, measure advertising performance, and remember website preferences.Ok