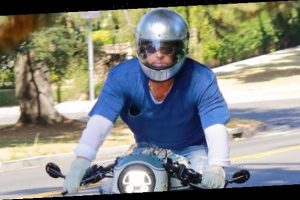 The ice has really thawed between Brad Pitt and ex Angelina Jolie following their bitter 2016 split. Once again he’s been photographed arriving her mansion on his motorcycle for a visit.

Getting out of nearly three months of home lockdown seems to have helped bring exes Brad Pitt and Angelina Jolie closer together when it comes to seeing each other face to face. Ever since Los Angeles County lifted stay at home orders due to the coronavirus, the 56-year-old hunk has been photographed paying regular visits to Angelina’s $25 million mansion during June and July. It’s not far from his own estate in the Los Feliz area of L.A. On July 28, Brad pulled up to Angie’s tall front iron gates on his motorcycle, pushed some buttons on the security box and made his way inside.

Brad rode aboard the same blue and white striped bike from his vast collection that he used during a June 23 visit to Angie’s place. The Oscar winning actor also wore the identical shiny silver helmet with sunglasses on, and used the same white protective riding gloves. There was no mistaking his handsome face through the clear face visor, as his movie star good looks were clear as day.

Brad looked dressed down chic, wearing a long sleeved white shirt underneath a royal blue tee. He had the cuffs on his faded blue jeans rolled up for the ride over from his place, and donned his usual white slip-on sneakers that he’s worn in previous visits to Angelina’s house. The Once Upon A Time In Hollywood star definitely has a favorite casual look that he sticks to.

The actor most recently was photographed visiting Angelina’s home on July 9, just three days before their twins Knox and Vivienne turned 12. The kids recently took a trip out of town with their mom last week, as they were photographed disembarking from a private plane at Burbank Airport on July 23, along with Angelina and their older sister, 15-year-old daughter Zahara.

While Angie has been photographed going on shopping trips with Vivienne and making her way to dinner with son Pax, 16, during June and July after quarantine ended, Brad has yet to be caught on camera with any of his kids since his infamous Sept. 2016 split from the Maleficent actress. He obviously likes to keep a very low profile during his time with their children.

After an acrimonious child custody battle following their breakup, Brad and Angelina came to a temporary custody agreement in Nov. 2018. Fortunately, things got better with time. “They have a complicated arrangement at present, but she has primary custody with Brad getting tons of visitation as instructed by a judge the last time they went to court,” an Angelina source told HollywodLife.com EXCLUSIVELY in Oct. 2019. Hopefully Brad and Angelina have been able to spend some quality time co-parenting their children together during his recent visits to her home, which were once unthinkable with how deeply the former couple went to war during their split. The fact that he’s over at her estate every few weeks now is a terrific sign that relations have greatly improved between the exes.

END_OF_DOCUMENT_TOKEN_TO_BE_REPLACED

END_OF_DOCUMENT_TOKEN_TO_BE_REPLACED
We and our partners use cookies on this site to improve our service, perform analytics, personalize advertising, measure advertising performance, and remember website preferences.Ok