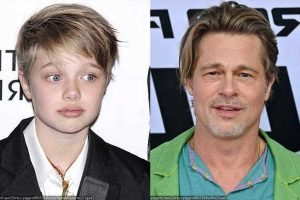 The 58-year-old actor gushes about his 16-year-old daughter’s love for dance and performance while attending the premiere of his new movie ‘Bullet Train’ in Los Angeles.

AceShowbiz –Brad Pitt is an attentive father. Despite the long and ongoing custody dispute with his ex-wife Angelina Jolie, the actor apparently still keeps up with his children as he has talked about one of his daughters and her passion for dance.

At the “Bullet Train” premiere at the Regency Village Theatre in Los Angeles on Monday, August 8, the 58-year-old gushed over Shiloh Jolie-Pitt‘s dancing skills. “It brings a tear to the eye, yeah,” he told ET of a recent video which featured the teen showing her impressive dance moves, adding that she’s “very beautiful.”

Brad admitted Shiloh did not inherit the talent from him as he said with a laugh, “I don’t know where she got it from. I’m Mr. Two-Left-Feet here.” Of whether he’s hoping his kids to stay away from the spotlight or embrace the creative arts, the father of six shared, “I love when they find their own way, find things they are interested in and flourish.”

Shiloh wowed fans as she showed her dancing skills in a YouTube video released by pro dance instructor Hamilton Evans last month. In the clip, the 16-year-old girl demonstrated her tight moves as she danced to Doja Cat‘s single “Vegas”. The video was part of the choreography routine showcase taken from Shiloh’s dance class that is based out of the prestigious school Millennium Dance Complex in Los Angeles, California.

It wasn’t the only time Shiloh showed off her talent. In April, she was spotted dancing with other dancers to Ed Sheeran‘s hit song “Shivers”. She was also featured in another video showing her moves to Lizzo‘s “About Damn Time”.

According to Us Weekly, both Brad and Angelina have been supportive of Shiloh and her passion for dancing. “They’d have no issue if she wants to turn pro, but they’re not pushing it on her by any means,” a source told the site.

Another source spilled to Hollywood Life that Shiloh was very committed to dancing. “She started out with private lessons before joining a small studio near their house,” the so-called insider dished. As for Angelina, the source claimed, “Angelina’s amazed by how talented Shiloh is, but more than that she loves to see how happy Shiloh is when she’s dancing.”