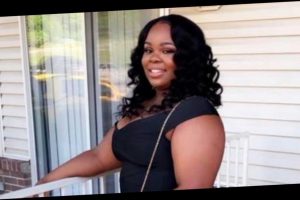 Former Detective Brett Hankison pleaded not guilty on Monday to three counts of wanton endangerment, the only charges that were filed by the grand jury reviewing the death of Breonna Taylor, CBS affiliate WLKY reported. Neither Hankison nor the two other officers involved in the fatal police shooting were charged directly with Taylor’s death, sparking nationwide protests.

At the plea hearing, Hankison’s attorney asked the judge to allow his client to be able to keep a weapon for self-defense, saying he’s “received a number of threats” — but the judge denied the request due to the conditions of his bond, WLKY reported.

Kentucky Attorney General Daniel Cameron announced the results of the grand jury proceedings last Wednesday. The jury found that when three Louisville Metro Police Department officers traded gunfire with Taylor’s boyfriend during a drug raid at her apartment, Hankison fired 10 shots from outside of the apartment. Some of those bullets hit a neighboring apartment where a man, child and pregnant woman were inside, prompting the wanton endangerment charges.
Get Breaking News Delivered to Your Inbox

In Kentucky, wanton endangerment occurs when someone “manifesting extreme indifference to the value of human life, deliberately engages in conduct which creates a substantial danger of death or serious physical injury to another person.” Each count is a class D felony that carries up to a five year sentence.

No other charges were filed by the grand jury. The jury found that none of Hankison’s bullets struck Taylor and determined the conduct of the other two officers was justified, Cameron said.

Hankison was fired in June, but the other two officers — Jon Mattingly and Myles Cosgrove — remain on the force.

Hankison turned himself in the day the charges were announced and was released on $15,000 bond, according to WLKY.

During the Monday hearing, the judge also ordered that the recordings of the grand jury deliberations be filed by Wednesday, WLKY reported. The grand jury’s report has not been made public, prompting scathing criticism from the attorneys representing Taylor’s family.

“We’re still trying to figure out what evidence did Kentucky Attorney General Daniel Cameron present to that grand jury?” attorney Benjamin Crump told “CBS This Morning.” “Did he present any evidence on behalf of Breonna Taylor?”

Steven Romines, another attorney for Taylor’s family, also called on Cameron to release the full grand jury transcript on CBS This Morning.

“I don’t know why [Cameron] wants to play these games about talking about small portions of the evidence and not releasing the entire file,” Romines said. “Release the entire file, and let people make their own decisions.”

Hankison’s plea also comes as newly released body camera footage appears to show him violating department policy after the fatal shooting. The body camera footage released by Vice News, which has not been verified independently by CBS News, appears to show Hankison walking into the crime scene after the incident. That would be a violation of police policy, which mandates that officers involved in a shooting be “isolated from all non-essential individuals for the remainder of the initial investigation.”

When asked about the footage, Hankison’s attorney said “Unlike a lot of lawyers, I do not try my cases in the press. I try them based on evidence in the courtroom.”

END_OF_DOCUMENT_TOKEN_TO_BE_REPLACED

END_OF_DOCUMENT_TOKEN_TO_BE_REPLACED
We and our partners use cookies on this site to improve our service, perform analytics, personalize advertising, measure advertising performance, and remember website preferences.Ok