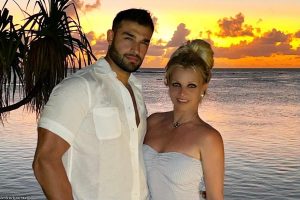 Less than a week after subtly divulging that she’s tied the knot with her ‘husband,’ the ‘Toxic’ hitmaker unveils that she is pregnant and suggests that she may be having twins.

AceShowbiz –Britney Spears has announced that she’s having a bun in the oven. The “Baby One More Time” hitmaker revealed her pregnancy just a few days after she subtly revealed that she has secretly tied the knot with Sam Asghari.

Taking to her Instagram page on Monday, April 11, the “Oops!…I Did It Again” singer wrote, “I lost so much weight to go on my Maui trip only to gain it back. I thought, ‘Geez … what happened to my stomach ???’ My husband said, ‘No you’re food pregnant silly !!!’ ” She continued, “So I got a pregnancy test … and uhhhhh well … I am having a baby.”

“4 days later I got a little more food pregnant. It’s growing !!!” Britney added. The 40-year-old pop star then said, “If 2 [babies] are in there … I might just loose it.” She later explained that she “obviously won’t be going out as much due to the paps getting their money shot of me.”

Elsewhere in her lengthy caption, Britney told her fans that “it’s hard because when I was pregnant I had perinatal depression” and “it is absolutely horrible.” Britney, who testified that she was forced to keep her IUD in during her conservatorship, concluded her post, “This time I will be doing yoga every day !!! Spreading lots of joy and love !!!”

Following Britney’s shocking pregnancy announcement, Sam took to his own account to confirm that he’s going to be a father soon. “Marriage and kids are a natural part of a strong relationship filled with love and respect,” he penned. “Fatherhood is something i have always looked forward to and i don’t take lightly. It is the most important job i will ever do.”

Britney’s pregnant news came less than a week after she introduced Sam as her husband. “Here’s me shooting pics of my HUSBAND [ring emoji] !!!! I have to do big letters cause that what my sister has always done on her gram,” she wrote underneath a portrait of the “Can You Keep a Secret?” actor.

“Anyways it’s so mind opening being in a resort where there is no paparazzi … for the first time in my life,” Britney continued in her message, “I can actually be that girl who can act stuck up and talk to others about how I’m getting married … out at dinners!!!!” She went on to note, “Acceptance and freedom are my key factors in my life at the moment,” before professing her love to her partner as saying, “And also loving this yummy man who I love so much !!!”

Britney and Sam got engaged in September last year after dating for nearly five years. Two months later, the “Sometimes” songstress stated that she’s “thinking about having another baby” as her conservatorship was officially terminated.