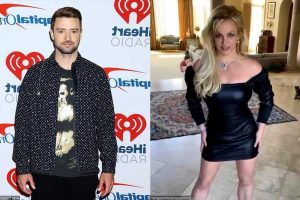 In a social media post, the ‘Oops!…I Did It Again’ hitmaker calls out the ‘Suit and Tie’ hitmaker for ‘so respectfully’ apologizing to her and Janet Jackson ’20 years later.’

AceShowbiz –Britney Spears is throwing shade at Justin Timberlake again. The “Toxic” hitmaker has dissed her ex over his apology when confirming that she’s currently writing a book that brings up “past events.”

Making use of her Instagram account on Monday, April 4, the 40-year-old pop star said that working on her upcoming memoir is helping her to address some drama in the past by taking “the intellectual approach, as Justin so respectfully did when he apologized to [Janet Jackson] and me.” She noted, “Although he was never bullied or threatened by his family, he took the opportunity to apologize 20 years later!!! Timing is EVERYTHING!!!”

Elsewhere in her post, Britney said that the process of writing her new book “is actually healing and therapeutic.” The “Sometimes” singer added, “I can only imagine that I do sound childish but I was extremely young when the events took place.”

The apology in question came last February in the wake of the release of “Framing Britney Spears“, a New York Times documentary that scrutinizes Britney’s career and her years-long conservatorship. “I am deeply sorry for the times in my life where my actions contributed to the problem, where I spoke out of turn, or did not speak up for what was right,” the “Suit & Tie” crooner wrote at the time. “I understand that I fell short in these moments and in many others and benefited from a system that condones misogyny and racism.”

More recently, Britney accused Justin of using her name for “fame and attention.” In a March 28 Instagram post, she penned, ” ‘Dear child … your mom had a serving with her book at the exact time when you needed her most …all for WHAT ??? FAME and ATTENTION !!!!’ Your ex did the same thing … he served with his first album using your name claiming you did him dirty !!!!”

As for her upcoming book, it reportedly will tell about her career, her life and her family. Page Six confirmed in February that the “…Baby One More Time” hitmaker had signed a $15 million book deal to release her upcoming tell-all memoir, which will be published by publishing house Simon & Schuster.