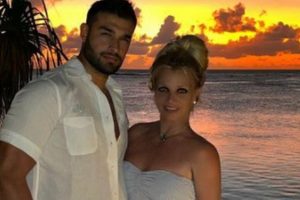 Britney Spears has sent fans wild as she drops huge “clue” she has married fiancé Sam Asghari on the couple’s tropical romantic holiday.

Britney is on holiday with her fitness trainer beau Sam, who she’s been with 2016 after meeting on the set of her ‘Slumber Party’ music video.

The Oops I Did It Again singer, 40, shared a video on her Instagram of baby turtles leaving their hatch and heading to the sea.

She dropped the marriage clue in her caption of the post. She wrote: “My husband @samasghari sent me this and said, '100 baby turtles leave the hatch, only 20 make it to reefs because most get eaten by sharks.'

"'Only 1 strong strong Turtle makes it out of 100 and comes back a year later stronger than ever and hatches babies.' He said these turtles represented life!"

Fans were quick to pick up on the singer’s choice to call Sam her husband.

One wrote: “Husband???” followed by a red heart emoji and heart eyes emoji.

Another asked: “Did someone say HUSBAND?” followed by four heart eyes emojis.

While a third shared: “This is Britney telling us she is married” followed by a heart eyes emoji.

It clearly wasn’t a slip up as the star took to her Instagram a few hours later and shared a black and white picture of Sam lying on a sunbed holding his hand up to the camera.

The 28 year old is wearing a black suit with white open collared shirt and black loafers.

She referred to him as her husband again in the post to wish him a happy birthday.

She wrote: “Such an amazing pic of my husband @samasghari!!!! He’s such a hard worker and he amazes me each day with his passion for life !!!! I’m so lucky to be able to share my life with him …. HAPPY BIRTHDAY!!!!: @estudios_official ”

Again fans flocked to the post picking up on her clue.

One wrote: “Britney Jean what do you mean by HUSBAND??? You got married already? If so, love it!!!” followed by three red heart emojis.

While a third wrote: “Husband? Last night, it was Fiancé….”

Britney has shared a selection of snaps with fans from the loved-up couple’s holiday.

The star, who hasreportedly signed a massive book deal to share the story of her conservatorship, shared photos of herself frolicking in the ocean waves completely nude, with diamond emojis added on top of the photos to cover up her private parts.