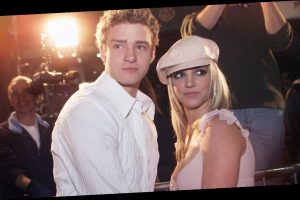 Justin Timberlake had Britney Spears in the mood to shake it last week. Spears took to Instagram on Wednesday to share a sultry dancing video of herself moving to JAY-Z’s 2013 song, “Holy Grail,” which features vocals from Timberlake.

Spears, who split from Timberlake in 2002 after three years together, wore a black cropped turtleneck and plaid shorts in the video. And she even tagged her ex in her caption.

This isn’t the first time Spears has danced to one of Timberlake’s songs on social media. Last April, she reflected on their breakup while praising his track, “Filthy” — and he responded!

Timberlake responded to Spears’ post with a crying-laughing emoji and a few raised hands.

See more on Spears in the video below.