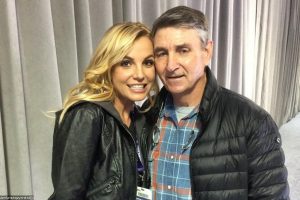 The ‘Toxic’ hitmaker, who is now engaged to longtime boyfriend Sam Asghari, believes that her father’s involvement could ‘impede’ their prenup negotiations.

AceShowbiz –Britney Spears is requesting a court to get her father removed from her conservatorship “immediately.” On the reason why, the “Toxic” hitmaker doesn’t want Jamie Spears to be involved in her process of getting a prenup with fiance Sam Asghari.

In new court documents filed by Britney’s new lawyer Mathew Rosengart it’s stated, “To all the reasons why immediate suspension always has been required, we now can add another essential one: as has been publicly reported, Ms. Spears recently became engaged.” It added, “With Ms. Spears’s consent and pursuant to her instructions, Ms. Spears and the undersigned counsel are in the process of engaging a family law attorney to craft a prenuptial agreement.”

The filing continued, “The prenuptial agreement process will require communications with and cooperation from the Conservator of her Estate but, as referenced above and well-established in the record, given that Ms. Spears’ s relationship with that Conservator (her father) is broken, Mr. Spears’s continued involvement would impede the ability to negotiate and consummate a contract that all can agree is in Ms. Spears’s best interests.”

Britney and her lawyer want Jamie to be suspended from his role of her conservator by “no later than Sept. 29,” the date of the next court hearing in the case. Jamie, however, already filed a petition to end her conservatorship on September 7.

Britney confirmed her engagement to Sam via Instagram on September 12. Posting a video of her flaunting her massive diamond ring from his now-fiance, she wrote in the caption, “I can’t f**king believe it!” along with several ring emojis.

After Britney shared the happy news, actress Octavia Spencer jokingly suggested to her, “Make him sign a prenup.” In response, Sam took to his Instagram Story to declare, “Thank you for your concern about the prenup!” He then added, “Of course we’re getting iron clad prenup to protect my Jeep and shoe collection in case she dumps me one day.”