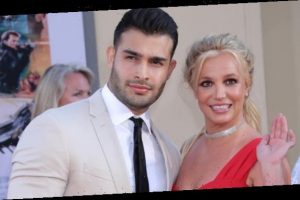 Britney Spears had a special video message for Pride month, but her BF Sam Asghari interrupted it. She gave him an adorable tongue lashing as a result, telling him ‘Baby, be quiet!’

Britney Spears took to her Instagram on June 23 to thank the LGBTQ community for “some of the best nights of my life.” She got dolled up in a frilly black dress to deliver her video in honor of Pride month, but instead gave fans a peek at how she and boyfriend Sam Asghari, 26, interact when having a small spat. The pop princess began her IG video by saying,” To all my friends in the LGBTQ community, Happy Pride month. You guys bring so much heart, passion and articulate everything you do.”

“Because of you, I’ve had the best nights of my life. I love you so much it hurts,” Britney, 38, gushed. But she didn’t continue onward because Sam could be heard cheering on her message, yelling “Go LGBTQ” from off camera. Britney turned to look at him and shouted, “Baby, be quiet!” for interrupting her. She then threw her hands in the air with a look of frustration on her face.

The way she told Sam to knock if off was so adorable though. It showed the playfulness the couple has together. How she yelled “Baby” was loud, but totally precious. Sam even showed his support, writing in the comments of the video, ‘Gooo” with a Pride flag emoji, adding “best community.”

Britney looked so pretty, wearing a black mini-dress for her Pride month appreciation video. The frock featured long sleeves of see-through netting, which also went across the front of the look in a long “V.”  Black panels went from her chest to her short black skirt, which included a belt to show off the “Toxic” singer’s tiny waist. The shoulders and hemline featured ruffled trimmings, and the dress included a high neckline. It was far more covered up than some of Brit’s recent belly-baring crop top looks that she’s been sporting.

Britney wore her trademark heavy black eyeliner and shadow for the video. She also rocked her brand new bangs that covered her forehead, while her long blonde locks cascaded over her left shoulder. “Happy Pride Month!!!! I love my LGBTQ+ fans so much….you all bring me so much joy and I am proud to support you!!” Britney wrote in the video’s caption, along with rainbows and colorful heart emojis. Fans loved her sweet Pride month message, including her longtime choreographer pal Brian Friedman. He responded in the comments, “Yes you have had the best nights of your life…pretty sure I was there! Thanks for the love Brit.”