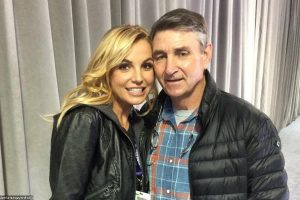 The lawyer representing Britney Spears is determined to get answers from her estranged father Jamie over surveillance reports before the conservatorship ends.

AceShowbiz –Britney Spears‘ lawyer is demanding answers from her dad over reports suggesting he installed recording and listening devices in the pop star’s bedroom during his 13-year stint as her conservator.

Mathew Rosengart claims Jamie Spears is urging the judge overseeing the singer’s conservatorship to end the arrangement, so he doesn’t have to face a deposition concerning his actions.

Jamie was suspended as Britney’s conservator following a court hearing last month (Oct21) and replaced by an accountant picked by Rosengart and his client, and now the Toxic star’s father is fighting to shut down all restrictions hanging over his daughter.

Rosengart has filed legal documents, obtained by TMZ, suggesting Jamie wants to end the conservatorship to avoid answering questions under oath, and he is demanding “all documents and communications relating to any recording or listening device in the home or bedroom of Britney Jean Spears, including all documents and communications relating to the decision to place any such recording or listening device and the records of any such recording.”

He is also demanding communications relating to “the electronic surveillance, monitoring, cloning, or recording of the activity of Britney Jean Spears’ personal telephone, including but not limited to the surveillance, monitoring, cloning, icloud mirroring, or recording of calls, emails, text messages, internet browser use or history, and social media use or direct messages on social media.”

The surveillance story was uncovered by director Samantha Starks as she researched her TV expose, “Controlling Britney Spears“.