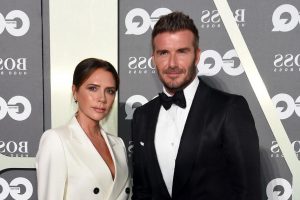 Brooklyn Peltz Beckham fans were left puzzled over his new married name after mum Victoria Beckham, 47, threw a spanner in the works by referring to him as Beckham only in her latest Instagram post.

Following the wedding of the year at the weekend, which saw 23 year old photographer and budding chef Brooklyn tie the knot with the love of his life Nicola Peltz, 27, speculation turned to what the couple would be known as going forward.

It seemed the loved-up pair made their plans clear when both referred to their married names as being double-barrelled.

The newlyweds then hammered the point home by changing their Instagram handles to "Peltz Beckham".

Yet despite that, fashion designer and mum-of-four Victoria referred to her eldest son by his given surname, going one step further and appearing to assume Nicola would be sacrificing her own surname for Brooklyn's too.

Alongside a gorgeous shot of her and husband David walking down the aisle ahead of the ceremony at Nelson Peltz's billionaire beachfront estate in Miami, Florida, Victoria gushed: "Proud mum and dad.

Wearing an incredible silver wet-look gown alongside her beaming hubby David Beckham, 47, who was dressed to match his son in black tie, Victoria seemed emotional as she held back the tears in anticipation of her eldest baby getting married.

Yet despite the wonderful scenes, some were unimpressed by the former Spice Girl's puzzling caption, as fans took to the comments to criticise Victoria for seeming to "ignore" Brooklyn and Nicola's choice.

Another fan joked: "@nicolejparchment that's the second post she's done it on. Mummy's not happy. Brand Peltz-Beckham is on the way and she's p*****."

"I think these guys are doing this on purpose. It's Peltz-Beckham! They clearly mentioned it (both Brooklyn and Nicola Anne)," a third follower commented.

Others were left incredibly confused by the lack of unification from the family, as one person asked: “Did I not read he’s taking her name???"

"She just writes their combined last name. He’s not a Peltz," another follower attempted to clarify. "Victoria is very sweet and would also empower her daughter to hyphen her name if she wishes. We don’t all just take the mans last name anymore."

Brooklyn and his actress wife's nuptials were exclusively photographed by Vogue, as the magazine shared a selection of magical shots of the bride in her Valentino gown following the day.

Youngest Beckham sibling Harper Seven, 10, was a bridesmaid alongside a number of other girls dressed in white dresses, while Romeo, 19, and Cruz, 17, were also part of the groomsmen.

For all the latest celebrity news, sign up to our daily newsletter here.