Home » Celebrities » Brooklyn Beckham flaunts another tattoo tribute to fiancée Nicola Peltz as he calls her ‘my love, my life’

Brooklyn Beckham flaunts another tattoo tribute to fiancée Nicola Peltz as he calls her ‘my love, my life’ 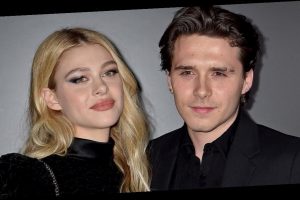 Brooklyn Beckham has revealed a brand new tattoo he got in honour of his fiancée Nicola Peltz.

The 21 year old, who recently "secretly flew to Miami to celebrate the New Year" with his other half, already has three tattoos as tribute to his other half.

Nicola took to her Instagram stories to unveil the new inking on the amateur photographer's forearm, which reads: "My life, my love, my truth, my breath, my reason, my beauty, my previous."

Over this, she wrote: "Forever my person @brooklynbeckham".

Brooklyn later took to his own social media page to post a sweet snap of himself smiling for the camera as he rests his freshly inked arm on a table. The star dons a plain red T-shirt and a rose emoji on his hair in the photo, which he wrote over: "Your so pretty to look at @nicolaannepeltz". [sic]

The brunette star also has his wife-to-be Nicola’s name inked on his neck, which was spotted in a snap posted to his Instagram page.

Brooklyn, who was recently reportedly warned by mum Victoria to slow down his engagement, posed topless in the black and white photo. He has one hand placed across his body and resting on his shoulder, where he is wearing a ring on his wedding finger and a Bvlgari watch on his wrist.

Meanwhile, the star is looking down and has his brown hair pushed back from his face with a headband.

Brooklyn has several inkings on his body, including the number seven, which was the number his father David, 45, would wear on his football shirts, a etching which read “mama’s boy”.

But, the most recent tatt appears to be the one on his neck, which is his 25 year old fiancée Nicola’s name.

Who is Brooklyn Beckham dating? His relationship history as he remains in US with girlfriend during lockdown

As he shared the photo with his 12.3million followers, Brooklyn thanked Bvlgari for the timepiece on his wrist in the caption. He wrote: “Thank you #Bvlgari #BvlgariWatches #BvlgariAluminium #ad”.

Brooklyn’s photo received more than 220,000 likes as Nicola gushed over her husband-to-be in the comments.

She wrote: “so handsome” [sic] followed by an angel emoji. This is was the second inking Brooklyn appears to have dedicated to American actress Nicola.

Brooklyn, who announced his engagement to Nicola in July, recently showed off a tattoo on the back of his neck of his wife-to-be’s eyes.

He unveiled the masterpiece to his 12.3million followers in a photo which shows him applying his mum's new lipstick on his fiancée Nicola, 25, who could be seen looking at the camera with her smouldering eyes. A video also shows the pair laughing as they fall down together.