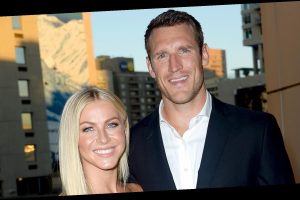 Healing through tears. Brooks Laich has been learning to “honor” his emotions as Julianne Hough filed for divorce five months after their split.

Julianne Hough and Brooks Laich: The Way They Were

The Canadian athlete, 37, opened up about the “liberating” journey of accepting his unhappy feelings during the latest episode of his “How Men Think” podcast on Monday, November 2. During a conversation with author and TV personality Dr. V, Laich admitted to struggling with feeling “unemotional in personal relationships” because of the masculine pressures of professional hockey. Now, however, he’s taking steps to express his emotions in a healthier way.

“I cry all the time and it’s wonderful,” Laich said. “It’s something I’ve recently learned since the passing of our two dogs. I’ve learned how to honor emotions in the moment and let them come up and through me and out of me, and a lot of times that’s through crying. And you know me, I played pro hockey for 15 years, threw dudes into dudes. I’m a dude. But I love being able to release emotions truthfully, organically, in the moment — not suppress it.”

While he may have previously tried to “stuff” his negative feelings down, he realized “it’s not so healthy” to keep things bottled up inside. “It’s liberating to allow and give yourself the grace and the capacity to just allow that emotion to live and come out,” he added. “It’s like, ‘Oh, god. That felt great.’”

Laich and the Dancing With the Stars alum, 32, announced in May that they were going their separate ways after nearly three years of marriage. At the time, a source told Us Weekly exclusively that the duo’s split was “a long time coming” and that they were each “trying to find themselves separate from one another and deal with any issues they’ve faced that were exasperated while married.” Five months later, Hough filed for divorce in Los Angeles.

In the months since calling it quits, the former NHL player and the Footloose actress have each struggled with the emotional toll of their split. An insider revealed in June that Hough was “not in a good place,” while a separate source told Us that Laich “did not want a divorce” to begin with. Though the end of his marriage has been difficult, Laich is trying to appreciate the positives in his life — no matter how small.

Julianne Hough and Brooks Laich: All the Signs They Were Headed for a Split

Not only is Laich thankful for the things that bring him joy, but he’s also glad that he’s had to face hard times. “I also say I’m grateful for the blessings and the challenges in my life,” he added. “I’m grateful that life isn’t just easy. … Prayer has been a really big one for me to be able to acknowledge what I’m feeling. It’s just practicing gratitude out loud.”

END_OF_DOCUMENT_TOKEN_TO_BE_REPLACED

END_OF_DOCUMENT_TOKEN_TO_BE_REPLACED
We and our partners use cookies on this site to improve our service, perform analytics, personalize advertising, measure advertising performance, and remember website preferences.Ok