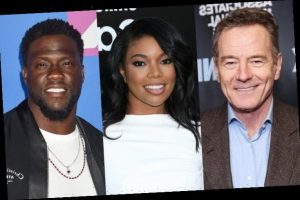 It was announced last month that Hart would be stepping in to replace late comedy legend Jerry Lewis as the host of the annual fundraiser and now the comedian’s “The Upside” co-star Cranston, Union, and “Tenet” ‘s Washington have joined a long list of celebrities who will make an appearance during the online event.

Lewis fronted the big variety and fundraising show from Las Vegas over America’s Labor Day weekend for more than four decades, helping to raise more than $2 billion for the cause. He hosted his last MDA telethon in 2010 and the event was subsequently scrapped as officials at the charity insisted the format was no longer relevant.

It has since been scaled down to a two-hour show, set to take place on 24 October (20).

“This is an incredible opportunity to bring the work of Jerry Lewis and the Muscular Dystrophy Association forward,” Hart said. “I’m honored to collaborate with MDA and my organization, to educate and entertain the public about the need to support people with disabilities and disadvantages, because we are all in this together. I can’t wait to have an incredible night for two critically important causes that are in urgent need of funding and hope.”

END_OF_DOCUMENT_TOKEN_TO_BE_REPLACED

END_OF_DOCUMENT_TOKEN_TO_BE_REPLACED
We and our partners use cookies on this site to improve our service, perform analytics, personalize advertising, measure advertising performance, and remember website preferences.Ok